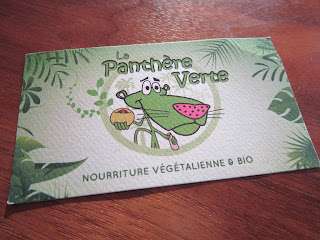 I have only been twice to The Green Panther, the vegan restaurant chain in Montreal. Twice it was at their restaurant on Mont-Royal Avenue, at two very different moments. Their mascot caught my eye, so I went there out of curiosity. The restaurant was virtually empty, I ordered what they claim is the best falafel of Montreal. After tasting it, I have to say that they are right. You can read more about the falafel here. I was hooked and I decided to come back as soon as I could.

I don't know if it was because it was in the evening instead of afternoon, or because The Green Panther had gained a reputation since my first time, but the second time I went there with my wife it was jam packed. A sign not only of the popularity of the restaurant, but of vegan eating in general. It is the new craze in Montreal, especially on the Plateau Mont-Royal, which always had its share of hippies and eco-friendly dwellers. Instead of being all quiet, it was loud. There were many Quebeckers, but also a few French (I find this strange as France is not a nation of vegetarians, let alone vegans) and the usual Anglos. This is less of a surprise as Anglo-Saxons are often more into vegetarianism and veganism. There was two of them, chatting very loudly, which was irritating my wife to no end. Mentioning it to me later, I said to tease her (I am mean like that sometimes): "Well, of course they were rude, they are English speakers like you." My wife replied (she is used to this kind of teasing from me): "I only share a language with them, you share their nationality." Touché. However cruel, she still said a great unknown line. I guess a nice place does not necessarily bring a nice clientèle. The staff was nice though, warm and friendly. And the food the second time round? We both had burgers, I don't remember which ones exactly. I think she had a VégéBurger and I had a VégéPanthère. Absolutely delicious, and I did not miss meat even once. And more strangely, I actually enjoyed the food more than my wife, even though she is vegetarian. So that was The Green Panther Experience.
Posted by Guillaume at 18:57