The outsider in the art gallery 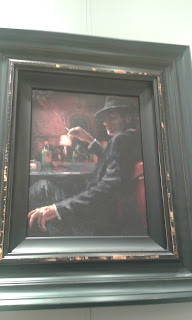 I thought about replying to the comments on this post, but then considered that writing a new post would be more suitable to speak of the whole story. Because I came back to the art exhibition of the new collection of Fabian Perez. I just walked in, avoided for a while the employees ready to give me a drink or sell me something. I just walked around through the crowd (which was not as big as I thought) and looked at the paintings. Lovely, lovely paintings. I could even take a picture of a few of them and, gasp, say a few words to the maestro himself. As he was about to be pictured with one of the woman who had bought something and the photographer was getting ready, I kind of bumped into him, said hello, he said hello, we shook hands, he thanked me for coming and I thanked him for showing up in this little town. And that was my meeting with Fabian Perez.

A bit later, the saleswoman who had tried to sell me something in my first visit earlier in the evening came back to me and told me that my favourite (it was a version of this one) had been sold already (and very quickly). I said that I couldn't win them all. Which is not a lie, technically. I did not even feel like a fraud playing the art connoisseur. She did try to make me buy the one you see here, I think it is one of the Whiskey at Las Brujas, which I admitted I loved quite a lot. It was one of the cheapest ones, incidentally. So it was not an original. I love when Perez depicts archetypical character, the hard man smoking and drinking hard liquor, all squared jaw and everything. The man one would sometimes want to be. I guess this goes with the female characters too. But anyway, I escaped without buying anything, although I wish I could afford a few of them, and I managed to talk to the artist. So it was a pleasant evening.
Posted by Guillaume at 21:08