I complain a lot about England. Deservedly so. Not that I don't like it, but this country is a mess. Too expensive, too small, politicians too mediocre (now anyway), an anachronistic monarchy that they couldn't keep to themselves (they had to export it in the Commonwealth), the cult of Lady Di in lieu of Mariolatry, reality tv shows, etc. I mean, no wonder they lost their empire. But there is one thing I have always loved about England: their beers. They have the best microbrewery beers in the world, the best beer tradition (IMO anyway), and say whatever you think about their gastronomy (which has improved tremendously, by the way), there is nothing that cannot be saved by a pint. Of course, too many brits nowadays drink lagers, or those silly fruit-juice alcoholic treacherous beverages. And not even all pubs have real ales. But one can find real ale in any town in England, and it makes everything more ebarable. Like a token of their past glorious days.

I say that, and Anthony Burgess once said that beer was the cause of England's fall and they should have kept opium as the intoxicating substance of choice.
Posted by Guillaume at 01:51 3 comments:

Well, the visitors are coming tomorrow after all. And Saturday we have other guests, so that will be a busy weekend. Carrie wants us to bake cakes or something. If we have time after the tidying up.
Posted by Guillaume at 13:59 3 comments: 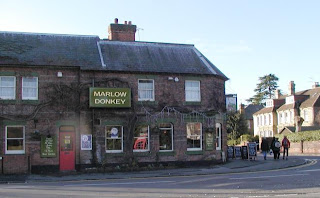 My sister in law and her boyfriend might be coming to visit us today. We might go for a drink in the many pubs of Marlow (hey, there is something good about this town: it has a few very nice pubs, with real ales). Probably the Marlow Donkey or the George and the Dragon, but most likely the Donkey, as it is our favorite. Nice drinks (nice beers especially), a bit of a posh décor, really nice and varied music (sometimes French) and a menu both delicious and filling. It was the very first pub I have been in Marlow.
Posted by Guillaume at 11:58 1 comment:

An earthquake. In England. Go figure. Anyway, been there, done that.
Posted by Guillaume at 01:53 1 comment:

Another reason why Marlow sucks

There are birds of prey flying over the town where we live. I am not sure if they are falcons or sparrowhawks or what, but they are too big to be commo birds. My wife and I saw a couple of them since we came here, we will try to take a few snapshots and put them on the blog soon.
Posted by Guillaume at 22:26 No comments:

Confession of a lapsed Catholic

I loved that title so much, I always wanted to write a text starting with it. I haven't practised in years, last time I went to a Catholic church was in October 2005 for the baptism of my godson, when a crazed vicar (or something of the sort) talked about deacon of light and the Original Sin and Godless schools run by Godless teachers making Godless Quebeckers turning to Satan. I feel pretty much like a Godless man myself, so I guess becoming a godfather was something of an hypocrisy. I dropped all the holy water bottle the priest gave me on my suit. It didn't burn my skin, so I guess I am still in a state of Grace...sort of. At least I will not need an exorcism. I visited churches afterwards, but they were Protestant ones (of the Church of England denomination), either to see weddings, to prepare my own wedding and subsequently to marry a unbaptised Anglican-by-culture-because-British wife. Shame on me. I might roast in Hell after all. Anyway, I lost my faith around the age of 16-17, ironically enough by reading the novels of Anthony Burgess, another lapsed Catholic who never really quite got over it (he even went so far as to write the script of Jesus of Nazareth). Religion is as much a cultural invention as a spiritual/moral compass, and as a desperately shallow man, I was always attracted to those often silly rituals, the cultural aspect of faith, but never quite got round the rest. Nowadays, religious people practice their faith before they bother practicing the moral coming with it, and said moral is subservient to the faith. Anyway, spiritual rewards are often an excuse to give Earthly Hell. So I can live happy with my shallow Godless, agnostic conscience.
Posted by Guillaume at 01:17 1 comment:

My wife says this blog should be called the complaints department. Two posts and I am grumpy already. I'll promess I'll try to be more positive next time. I'll try.
Posted by Guillaume at 21:55 2 comments: