A religion lesson from a Godless man

The Godless man of the title being yours truly. Yesterday, I was asked to cover a Religious education lesson. Somebody else was supposed to do it, the task was to basically get info from the Bible, but she did not know much about Bible stories. Looking through the exercises with the other colleagues, one turned to me and said "Guillaume, you are quite knowledgeable, why don't you cover this one?" So I did. It was an interesting experience. On Fridays, the children are not into work that much so getting them to actually do the exercises was difficult. I was amazed to see how little they know about Christianity. I expected the Muslim pupils to have difficulties, but I could not believe how the Christian ones have no religious culture whatsoever, or barely any. I don' think they retained much of it. I told them some basic stuff, always stressing that this was according to the Bible and therefore not necessarily acurate. A colleague told me at the end of the class that their tutor does not believe in God, therefore does not teach them much RE. I said I am an atheist myself, but I still knew about the Bible, thanks to years of Catholic brainswash (I said "of being educated in a Catholic school system", but that is what I meant). I do think the kids should learn about religions, but they should definitely be critical towards them. The way the educational system is organised in England, with the Church of England being anything but separate from the state, keeping the pupils critical is difficult.

Nevertheless, there are reasons for secularists like myself to be happy. It seems that there are less and less religious young people in the UK. I got this info from the Atheist Experience blog.
Posted by Guillaume at 13:51 4 comments:

Posted by Guillaume at 22:21 No comments:

My life on the bookshelves 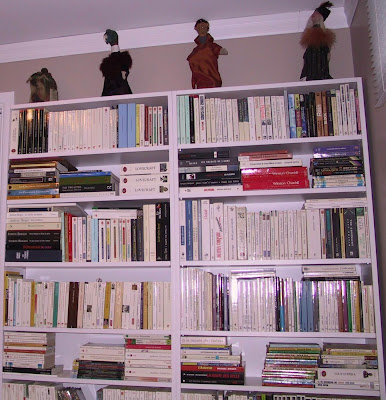 This picture was taken by my parents. These are all the books they got back from the old flat in Montreal, books I gathered in more than twenty years. I once blogged about something vaguely similar. I can't help but feel a bit sad that I don't have all these books at my grasp. Some will have to go to charity eventually (I am not fond of all the novels I read, obviously), but I hope to get some back here. I haven't read them all, for one, and I also want to re-read many of them. Watching these shelves, one can get a pretty detailed picture of what's in my head. Not that I remember everything I read, but I gained through them some knowledge and I kept at least some of it. Although I will never claim that I am an erudite, I have certainly tried to grow into one. It also shows my interests, the ones that changed through the years and the ones I kept. Bookshelves like thess ones have something of reassuring, they are both familiar but a lot of what they have are still terra incognita, to me or to any reader who might come pass it. I might be far from it, but I am glad the books are there on display, where they should be, and not in boxes.
Posted by Guillaume at 19:00 2 comments: 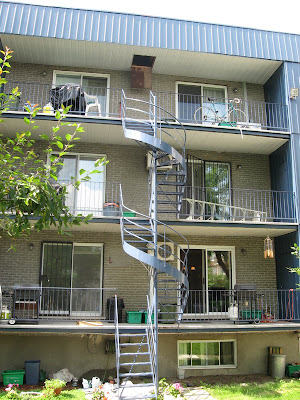 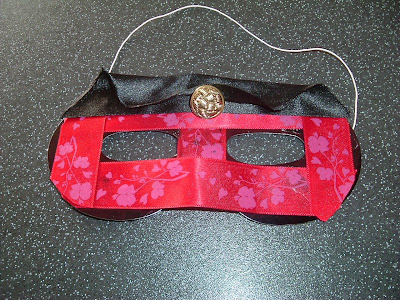 Yesterday, in spite of being very tired because of the week I had, my wife and I went to a masquerade ball with her colleagues, where we ate too little, drank moderately but enjoyed ourselves nevertheless because we were in good company (her colleagues and their boyfriends/husbands are really nice). I wore the mask that you can see left, which she made herself. It was a really nice mask, I did not wear it very long but I did have it for longer than I would have first expected. I say this, as disguises never last long when people are wearing them at a formal evening, somehow one starts feeling ridiculous about the whole thing. There is indeed something slightly ridiculous about wearing a disguise or a costume (including in the most formal circumstances), even if it is just a simple mask. I wanted to look a bit like Fantômas yesterday, with the suit and the mask, but I did not look ferocious enough. I ended up looking like a guy with a suit and a mask.

That said, I always loved wearing masks. It has something to do with the playful nature of the thing, as I wore them so often on Halloween nights and in the month before (usually domino masks like the one I wore yesterday, so I have a nostalgic attachment to that particular kind), and on other occasions, playing either masked avengers or masked criminals. The style of a chosen mask reveals just as much about yourself as it tries to conceal your identity (poorly when it comes to a domino mask). One can discover a few things about the way my wife perceives me when she made the mask. In any case, it is a nice accessory that is too seldom used in social events.
Posted by Guillaume at 16:07 2 comments: 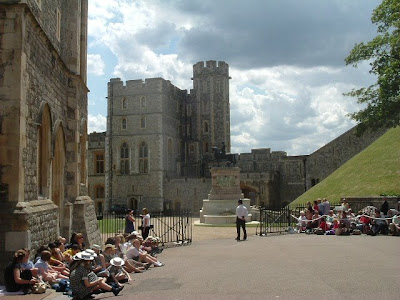 I went to the Garter Ceremony today, with a colleague and a few pupils from school. It was a divinely ironic situation for me, as I have absolutely no sympathy for the monarchy or the Queen of England. I am at the core of my heart a staunch republican and I make no m 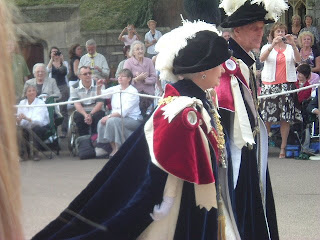 ystery of it. I am indeed so much of a republican that I prefer the pope to the Queen. At least the pope got elected, and did not reproduce to give birth to descendants and successors of lesser intelligence. I was therefore amazed that my colleague asked me to be the second adult to accompany the children. Asking a Quebecker, separatist, republican (like many Quebeckers), atheist (although she probably does not know that) to go with a few kids who are all in love with their monarchy (or at least prince William), that was I think a kind and generous offer, so I said yes. It is nice to be accepted and appreciated by some colleagues. It is also nice to be outside on a sunny day.

In any case, it made me see Windsor Castle from the inside. I see it everyday from the outside, and the familiarity of its presence kind of banalized its majesty. It made me see it in a new perspective and made me rediscover its beauty. This is a massive building, built by a man bearing the same name as me, who actually deserved to be king of England, as he rose to power because of his intelligence, not simply because he was born. And I could also appreciate the uni 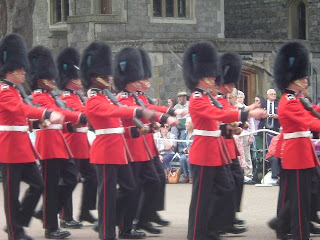 forms of the guards, slightly ridiculous, but not half as silly as the ones the royalties were wearing. They are the supreme power of this nation, and they dress like clowns. Garter Ceremony indeed. I kept those thoughts for myself of course. My colleague still teased me for my republicanism, but it was very friendly. I think native French speakers are considered in this country de facto republicans. 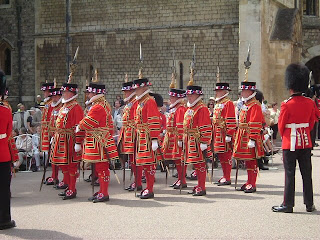 Anyway, about the soldiers, one has to admit, in spite of the often ridiculous attire, their discipline was impressive. There was nothing ridiculous in the rough harmony of the military ritual. And I do like the colourful uniforms. Especially the beefeaters uniforms, which I really loved when I was a child anf I first came into England. I associate them more with the gin brand than anything else, but it is still nice to see some in the flesh. Like all the rest this afternoon, in a more flamboyant fashion than all the rest, they are a living anachronism.
Posted by Guillaume at 20:34 2 comments:

Way Down In The Hole

I am discovering with pleasure The Wire these days. Great crime show, great characters, great story, great atmosphere, I will, I promise, blog about it one day. It made me discover a song by Tom Waits, Way Down In The Hole, which is used in the opening credits. I don't know much about Tom Waits, if anything at all, but I really love the tone of this song. I don't want this blog to be all happy and cheerful all the time, blogging about blossoming trees and summertime and so on. Sometimes, I need a healthy dose of profanity, of bitter beer, gloomy fiction and overall cynicism. I might not walk the streets of Baltimore, I still come from a city even Raymond Chandler deemed as highly corrupted. But in the end, I put the song here because I love it. 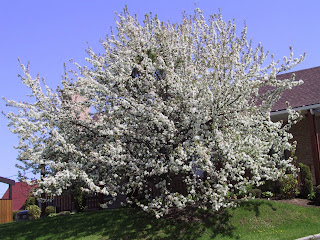 Here is a picture of the crabapple tree in blossom outside my parents's house. It was taken a few days ago. Because of the wind, it does not look as good now. Crabapples themselves are for me a sign of end of summer and beginning of autumn and harvest, but I associate the tree blossoming with hot summer days to come. I wish I could smell it, like I used to when I was spending the holidays at my parents's house. I don't know if it is because of it's pinkish white colour of the flowers that produces the perfume, but I always found the smell of this tree sweet and relaxing (and somewhat exotic). In any case, it is nice to see an image of summertime. Where I am these days, it is cold, it rains and it doesn't look or feel much like June. That said, I have reasons to be happy (or happier): I learned today that one of my senior colleagues appreciates me quite a lot and desperately wants me back for next year and another of my colleagues/client from the Saturday job is passing my cv around so I can find a bigger/better job. After the last few days feeling out of place and being considered with almost hostility by some, it is nice to be appreciated. So it might be gloomy outside, but I can now look at the weeks and months ahead with hope and confidence. And of course there is always the picture of the crabapple tree to cheer me up.
Posted by Guillaume at 20:30 3 comments:

A Whale Of A Tale 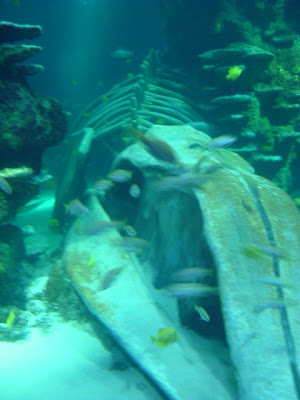 In order to shamelessly use the pictures we took at the London aquarium (since they go so well with they go so well with the background of this blog), I have decided to put here a song from the movie 20,000 Leagues Under the Sea. I already blogged about the movie. As a child, I used to love the song. I always liked Kirk Douglas, he was maybe more a charismatic actor than a great actor, but what a presence he had (and I guess has still). He was perfect to play the action man and he also had a perfect voice for this kind of song, raspy like one could believe a sailor man would get after spending months breathing the salty air above the ocean. I am in need of a holiday. My job is getting boring and one of the colleagues I mentioned recently is getting increasingly difficult. Until then, I have this song. 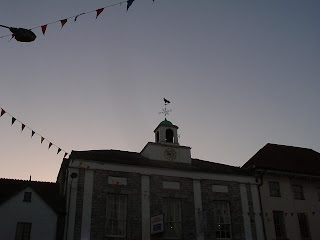