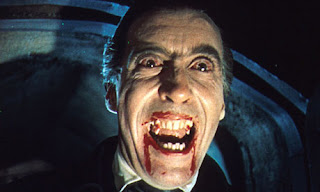 I am late reporting the news, however I could not ignore it, because of my love and admiration for the man and his work: Christopher Lee died recently, at the venerable age of 93. He played Dracula in many movies, he resurrected from pretty much every type of deaths, from getting a stake through his heart to being burned by sunlight, but he could not survive old age. More than a popular actor, Lee was a polymath and a true artist. I enjoyed so many of his roles, especially his Hammer ones. He played so many iconic characters, was often the best thing about many flicks of sub-qualities, but for me he will first and foremost be the Count. Because although Lee had many different roles, and Dracula was played by many different actors, Lee is the only one who actually bothered making the character true to the spirit of the novel, for which he had a great respect. When I read the novel, Dracula has the traits and the voice of Christopher Lee. That said, I will never limit his monumental career to the role I prefer. And I intend to watch more and more movies with Christopher Lee, of all genres. In the months leading to Halloween, I will treat myself with a few Hammer flicks. In the meantime, here is one of his interviews which I find fascinating:

I was surprised to read that he was related to Ian Flemming which helped him obtain his role in a Bond film.

My favourite story about Christopher Lee is when he was in Star Wars, George Lucas told him to imagine how a man sounds when he's stabbed in the back and Lee said he didn't have to imagine it, he knew from his wartime experience as a spy. Then he instructed Lucas on how to make that scene more realistic.