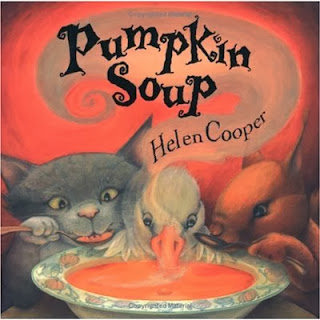 Anybody here into children books? Here is a book you can read as an adult. It is Pumpkin Soup by Helen Cooper. Because pumpkin is in the title and pumpkin soup is the MacGuffin of the story, it can be one of your Halloween reads. Especially since the look of the very lush pictures is very autumnal. The story is about a cat, a squirrel and a duck living together in a cabin with pumpkins in the garden. With the punpkins, they make... pumpkin soup. The best soup they ever was. The cat cuts the pumpkin, the duck adds just enough salt and the squirrel does the stirring. All is well, until one morning the duck decides that he will stir the soup. Which will bring conflict. A wonderfully simple story about friendship and understanding, with very well rounded characters and beautiful, beautiful beautiful images. There are two other books with the same character, in what is sometimes called the Pumpkin soup trilogy (!). I read them all, they were all wonderful stories and it was great to see the characters again, but the first book remains my favourite.
Posted by Guillaume at 13:33

Heck yes. You should see the spot by my bed, stacks of books, most of them ghost story anthologies and children's books.

Have you read any John Bellairs?