Odin the cat of many names 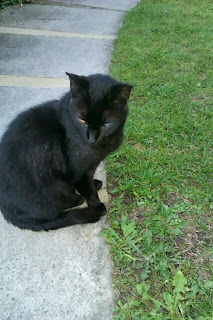 Last time I blogged about Odin was a bit more than a week ago, so since my readership seems to love the Odin saga I thought I would blog again about him tonight. Forgive this badly framed picture, but Odin is a capricious model. He does not let himself be shot easily. Anyway, my post will be brief, as there is not much more to tell, but a few anecdotes. I had a conversation with his owners, who don't mind that the people of the block take care of him. As my readership knows, the owners call Odin Homer, because they got him at Home Depot, in the garden section where he was squatting. They shorten it to Homie and they once had an Italian cat sitter calling him Homero. Strangely enough, Homero it is the name of one of the dogs of my Italian friend. She had a whole pack of them. I also know that the nurses coming here call him grumpy old man, which is as mean as it is often fitting. Odin does get a bit grumpy sometimes and he is not a young cat. And the people around him give him at least one other name. It does get a bit confusing sometimes, but for me, it will always be Odin. And I do think it is the most fitting one.
Posted by Guillaume at 22:46

I think its wonderful that people care for this cat, I adopted many strays over the years and they were all wonderful cats, even the crabby ones, there is nothing like a cat, very much their own master,!

Thank you all for commenting. Odin is an adorable cat and I am glad you all seem to love him.