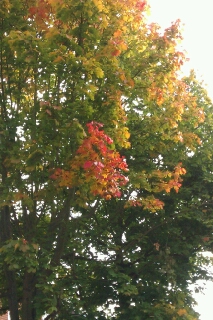 The picture at your right was taken a year ago, and about a month later than it is now, but I thought it fitted the subject matter of this post, which is a follow up to the post I blogged yesterday. I thought I needed to inform my modest readership of the development of yesterday's forecasts. It did rain today, although not nearly as much as I had feared. In fact, I remained dry all day. The heavy showers people dreaded was one short lived heavy shower. All the same, with the rain and the clouds came a good drop of temperature, and when I walked to buy my lunch I felt a chill that was pleasantly reassuring. It really felt like autumn was settling in. It got warmer at the end of the day when I left work, but the air was still cool and as the evening went on it slowly became cooler. In sum, the temperature today was typically autumnal, or to be precise typical of a September day. This is how I remember September to be.
Posted by Guillaume at 22:31