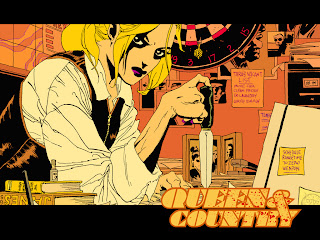 I have blogged before about Queen & Country the excellent espionage comic books series of Greg Rucka. I have read all the graphic novels and novels of the series, the only book I don't have yet is the art book. I LOVE the series, it's realistic tone and settings, the fact that it is an anti Bond, I also love the complex character of Tara Chace. Now I have recently learned that Ellen Page is supposed to play Tara Chace in a Hollywood adaptation of the comics. And I am skeptical about it, like for most adaptations by Hollywood.

I usually don't like when they cast a non British in a British role as they often lack genuineness and are cast because of their star appeal rather than their suitability. Ellen Page is a fine actress and I enjoyed her in Juno, but I have serious difficulties imagining her as a MI6 operative. Okay, so Lois Maxwell was also Canadian and played a British woman, but she had spent a long time in the UK, where she studied drama, before she took the role of Moneypenny. Page seems to have made mostly her career in United States so far. Another problem is her physically appearance: she is petite and kind of soft looking. Tara Chace has been drawn by many artists, but overall she is depicted as athletic and there is a hardness in her. I always pictured her as a bit of a tomboy. I suspect she is being cast as eye candy, which would be catastrophic. Years ago, I would have cast Cate Blanchett (yes, an Aussie, and yes my favourite actress) as she can play a Brit and she has the look of some of the renditions (see this portrait of her by Steve Rolston, the original artist). And obviously, apart from the casting I am suspicious of Hollywood's vision for this project: do they want to create a truly realistic and unglamorous spy franchise for the big screen, or they only want a spy chick? Because if it is the latter, they are missing the point of the source material and its relevance.
Posted by Guillaume at 11:27

Ellen Page is pleasant looking enough but I don't think anyone would mistake her for eye candy. For me, that's part of her appeal -- she looks like a real person. I don't know how good her British accent is, though. But she's a good actor so keep your fingers crossed!

Maybe not eye candy, but certainly star appeal. I am skeptical. It is difficult to match perfection when a story changes medium.