The train station at the DIY store 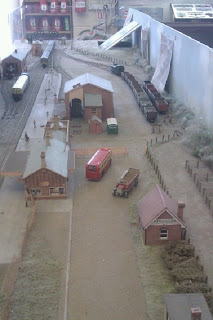 This picture was one of the three I took from the train station model featured at the local DIY store. It represents the local train station, now long gone, when there were a few lines going through the city and it was not the dead end it is now. The DIY store is maybe my favourite shop in this town, not because I buy much from them, in fact over the years I bought very little except spider repellant, but because of this miniature train station. They even added historical notes by the model. You go in this section, it is like going in a local museum. I feel guilty when I buy nothing. I could buy a few wagons I guess, as they do sell train models, but what's the point of buying train models without the railway network to make them run? Beside, if I ever buy an electric train, it would be a LGB, like the family one. This is obviously not as impressive as LGB, not nearly as big either, but it is still a nice set.

This model is still, as it is an accurate reproduction of a real station. But the setting is brilliantly life like. There are cattles, various engines, many buildings, human figures too and even at the corner the station hotel, now a pub, the first one you see when you get into town. It is like looking at a still life of another time. And I say still, but sometimes you could almost see them move, or you could imagine them moving anyway. When you know the place as it is now, you can only be impressed at how accurate the reproduction is. If I had enough patience and discipline, I think I could write a story or two inspired by it, by the atmosphere created in it. Maybe I am exaggerating, and I know the picture does not give it justice, but am I at least right saying it is an beautiful display?
Posted by Guillaume at 22:40

Yes, I think this is the same impulse too. I have more to write about this particular one.