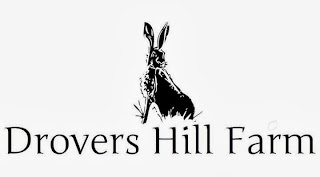 This post is both an anecdote and a plug. I know I am uploading an image of the business and not the apple juice, but I love the label with the hare looking around. So today I went quickly to a local Saturday market that was open during the morning.There were various stands of artisan and small food producers. I love these kinds of community markets, so anyway I went there and stopped, among other places, to the stand of Drovers Hill Farm, where I usually stop to buy their organic apple juice. Because I love their organic apple juice. It is delicious. I can drink it any time of year, but as it is autumn now and apple is the quintessential autumnal fruit, I thought it was the perfect time to buy some and show my appreciation to the business.

There were two children at the stand, a young boy of about eight or nine I would say, wearing a salesman's hat, and a girl older than him (eleven? twelve?). She was obviously more experienced with this and was teaching him how to speak to customers. I had seen her before, I think, but the boy was new. He offered me a glass to taste, which I accepted even though I very well know how it tastes. He poured me a generous portion. The girl said: "Don't pour that much! No, don't pour in another glass, that's rude." As he had already done so and was about to have a sip, she grunted: "Now don't drink it yourself!" I had to laugh. I told her: "Don't worry, I'm a salesman, he is still learning the tricks of the trade." I think this deserves to be a new great unknown line. The boy asked me if I was American, because there's something about my accent, he said. I told him no, that English was not even my mother tongue, but thanked him for thinking so. And then I told them I was French Canadian, which picked the girl's interest. She asked: "Do they speak French and English at the same time there?" I said sometimes. And I think what she said should also be considered a great unknown line. So in the end I bought two bottles, not only because of the apple juice (which, as I may have mentioned, is delicious) but because I think they were a very good sales team. I might actually email the farm to tell them they did a fine job.
Posted by Guillaume at 14:05

what a cute story!