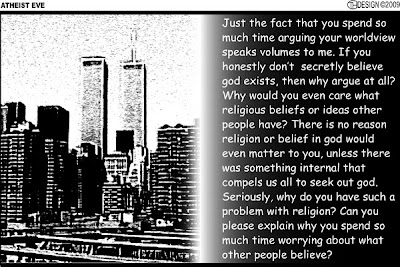 It is the 11th of September again. This year, I barely noticed it. Ironic, as the day was fittingly commemorative: cold and gloomy. I wrote my most important posts about it in 2008 and in 2009 already. I will commemorate it briefly tonight, by uploading first this drawing from webcomic Atheist Eve by Tracie Harris. I hope she doesn't mind. I deeply admire her work, this specific strip especially, how intelligent and compassionate it is. How eloquent too. Then I have decided to upload The End by The Doors. It was not meant to be a song about the end of times, but one cannot help feeling this association, especially with its use in Apocalypse Now, fittingly re-released back in 2001. Of course, 9/11 was not the end of times. There is no such thing, not by human standards anyway. Nevertheless, this reminds me of that day, of a certain state of mind that the world is in since that day. So here it is.