Odin and the Devil 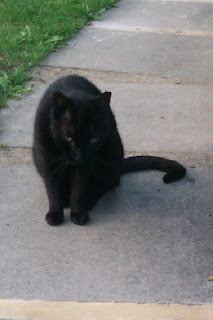 It is not Wednesday yet, so not the day of his namesake, but I am sure that my readership will forgive me if I blog about Odin already (and again). My feline friend has been a regular visitor and lodger of the apartment's garden, but he does not show up as often. Often, but not as often. His owners may leave the neighborhood at the end of October, because their landlord suddenly wanted the house back. They are in a tight spot: they need a place for two months that would accept their little menagerie.So I am blogging about Odin more often because I may be without news from him very soon.

As his owners (or his servants, as humans are to cats) have many animals, I keep feeding Odin, who is always hungry. I was giving him his lunch last Saturday when the nurses who work here came by, smiling at me. One said: "Oh you are a devil!" laughing. I replied: "If the nasty evil witch was telling me this, I would really think it's true and be very happy about it." They laughed. I was referring of course to the neighbour who thinks she runs the place and dislikes Odin. She dislikes everyone but herself really, and because of this she is disliked by everyone, renters that she despises and the nurses coming here. My line, however cruel it may have seem, is I think a great unknown line. I do feel some kind of furious joy when I feed Odin, or when I cuddle him when she is around. Satan was often a trickster in folklore and, while I would never play a nasty trick on her, I love to make her furious by welcoming this black cat. She must find me and the other cat lovers devilish enough. There is something devilish in Odin too. He is black of course, but there are shades of red in his fur. Maybe he is a familiar spirit and not the wandering Norse god in disguise. In which case I wonder why the witch has such contempt for him. In any case, I intend to have a few words with her. Not to start a quarrel, but to set things straight.
Posted by Guillaume at 22:40

I read once that in Britain, black cats are considered good luck (the opposite of here in North America). By hating Odin, she is refusing the good luck he represents.

You never have to apologize, as far as I'm concerned, for blogging about Odin! I've thoroughly enjoyed reading about him and his friendship with you. Puts a bright spot in my day!

Thank you for commenting and reading about Odin. He sure brings me plenty of joy.