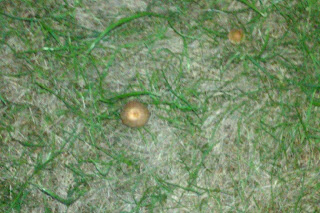 I took this picture a few weeks ago in the garden of the block, so back in August. It is of course a photo of two small mushrooms. Last year, there used to be many more, and much bigger ones. I should have taken pictures then. I am uploading this rather trivial picture because I have a conflicting interest and history with mushrooms and I thought it would make for an interesting post. As a child, I first loved mushrooms when one of the first babysitters I had fed me with half a tin of them every supper. She was the best babysitter one could ever dream of, a real Mary Poppins. So I loved those tins, until suddenly, I suddenly got disgusted by them. It took me years, decades, to enjoy mushrooms again, and only specifically cooked.

However, while I did not like them as food, I grew an interest about them as a child. I blogged before about it in October 2010. At primary school, we usually went to pick up wild mushrooms at this time of year, in woods not too far from school. I used to love it. Of course, I learned a lot about poisonous mushrooms in the meantime and I started associating the fungus with its folklore, and especially with witches. There were in some gardens what in English is called fairy ring, but on Québec we called them witches' rings (like in other places too), because they were supposed to be the the result of a witch gathering and dancing with the devil. Mushrooms became something I loved to hate, the instrument of many potions by evil witches. I didn't believe in witches, but my imagination ran wild. Even nowadays, I think about it when I see mushrooms like this. I am disappointed I haven't seen a witches' ring since my childhood.  Here, it is no surprise there are mushrooms in the garden, as I believe I have a nasty witch as neighbour. And she thinks she owns the garden, so this might explains the abundance of mushrooms sometimes. Corruption growing from her footsteps. Yes, I still have a sort of animosity towards the fungus. That said, I have now learn to love them as food, sometimes, but that is another story.
Posted by Guillaume at 20:22

i love everything about mushrooms from the way they look to the way they taste. i love how they show up so suddenly and disappear just as fast. i just made grilled mushroom sandwiches a few days ago. i still get witches rings in my yard. it's where i dance!12 yaKetr

@Cynthia-La mycologie est une discipline méconnue.
@Jaz-I love their supernatural associations, but the way they taste it is hit and miss for me. I used to loathe them. And I envy you for the witches rings, I hope you will show us some pictures one day.