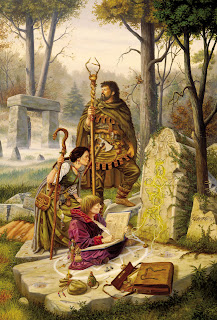 This is another lush drawing from former Dungeons & Dragons artist Larry Elmore, called Ancient Powers. I did not upload one of his works since April and thought now would be a good time. Warning: this post might be geeky. So yes, Ancient Powers is one of Larry Elmore's picture that I am particularly fond of. One of the reasons is that it has character and atmosphere. I could have written characters, as this is what they are. Often in medieval fantasy art, you have overly muscular heroes wearing loin cloths and scantily clad heroines, these people here are not like this. You have two spell-casters, the woman may be a druidess, a priestess of some sort or a magician, the thin, fragile looking man may be a mage too or a bard, judging by his colourful outfit (bards can cast spells in Dungeons & Dragons), watching over them is a strong man that does not display his muscles and who could also be a priest or a ranger. They are copying an ancient spell on a Celtic looking tombstone in a pseudo Celtic burial ground, while a dark clad figure is spying them in the mist by the dolmens. Oh, and it is set in autumn.

Autumn means many things for me, one of them being the season of the first D&Dr adventure of our ongoing campaign. We started it in late August, more than twenty years ago (21 to be precise). Usually, when you start a campaign, you make the time in the game coincide with the time of year in the real world, to keep things simple. Then things change, obviously, as time spent in the game goes much faster. But most of the first adventure we played was therefore set in autumn, and in a wide forest like the one on this picture. Furthermore, the mission our characters had was to find a ancient spell, lost somewhere in a ruined temple in the forest. I mentioned it on this post. So this image reminds me a lot of this first quest. Except that we did not have (yet) a personified adversary (a nemesis came on our second quest) and that our adventuring party was different. It was larger and there was no female in it. I played a ranger, PJ who was our Dungeon Master had nevertheless a character who was a Necromancer, Devadar my younger brother had priest of the God of War (and his character was ironically NOT named Devadar), there were two thieves, one human, one Elfic, one human fighter, one druid and finally one Dwarf fighter, who joined in later as an outcast of the nearby Dwarven kingdom. The group changed a lot since then. Anyway, this image reminded me of that.
Posted by Guillaume at 12:43