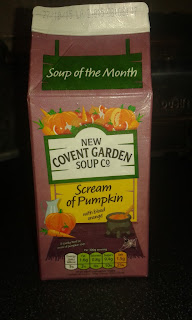 For tonight's countdown to Halloween's post, I have decided to plug tonight's dinner: the soup of the month of New Covent Garden Soup Co. Which is called this year Scream of Pumpkin. If this sounds familiar, it is because it is. I blogged about these Halloween themed soups before and I think I might make it a tradition every year, make one post of the countdown about the soup. A tradition within a tradition, in a way. So in 2012 I mentioned the Ghoulash, in 2014 the pumpkin, Stilton and sage soup (unimaginative name, but still my favourite so far) and as early as 2008 the Hocus Pocus (I don't remember much about this one). 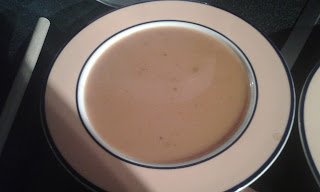 So, how does Scream of Pumpkin
compare to the others? It is not as thick or as filling as the Stilton one or the Ghoulash. It has interesting ingredients: apart from the pumpkin (always good in a soup), carrots and the tomatoes, it also has blood orange, which gives it an unusual flavour. It also has garlic, apparently to keep the vampires at bay. So it is tasty, albeit not as hearty as I'd except an October soup to be. We had it with garlic bread, our usual accompaniment with soup. So we had extra garlic to keep vampires away.
Posted by Guillaume at 20:08

I would have expected pumpkin soup to be orange!