The most haunted pub in York 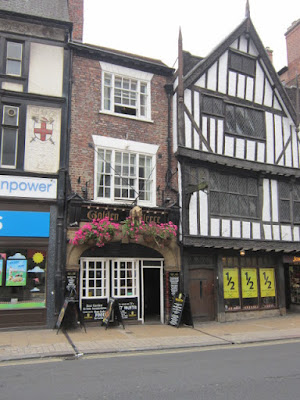 For today's (first?) countdown to Halloween, I will blog about a pub in York, one of the ncie discoveries of our last holidays there: the Golden Fleece Inn. It boasts itself to be the most haunted pub in York. However, like the most haunted castle in England, I didn't see any ghost during our visit, in spite of keeping my eyes and mind wide open and more importantly, in spite of dirnking in the whole evening a rather important quantity of beer. Not that I am a big drinker, but as it was pouring, we were waiting for a taxi that came only very late. By that time, I was suspecting the driver was afraid to stop by. He showed up in the end, but the ghosts were absent 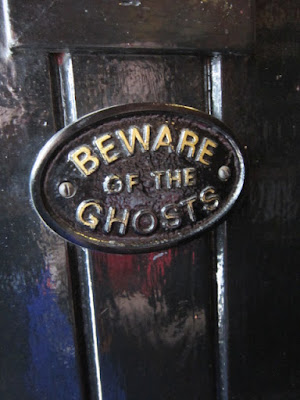 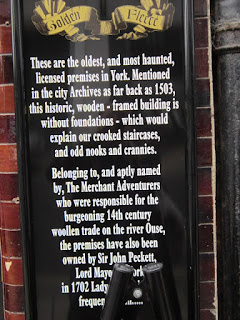 They do make a big deal of the phantoms in this pub. More than the Kingsbridge Inn in Devon, which is another allegedly haunted pub I visited. I guess the people at the Golden Fleece has been doing it for much longer. York, like Devon, has a big part of its tourist industry based on ghost stories and paranormal. We are greeted by this sign at the door of the Golden Fleece and one of York's many ghost walks starts from the pub. They seem quite popular. If it had not been so rainy, we might have gone to one, but when it rains, I'd rather be warm and dry in a cosy English pub drinking real ale than out in the rain. If I am to meet a ghost, friendly or evil, might as well be in a place where the spooky atmosphere does not get in the way of comfort. And the Golden Fleece offers both atmosphere and comfort. I love any old English pub with a bit of history, the ghosts, or at least the ghost stories are a bonus. 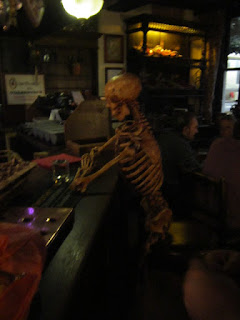 So anyway, we saw no real ghosts. Of course, absence of evidence is no evidence of absence. So there might have been some, for all I know they might even have been legions. And there are also a few made up ones, which I spent a good deal of time finding and taking pictures of, to make sure at least they existed and it was not the beer that was making me see things. Until Halloween come, I will show a few of them in another post. But let me introduce you to the main one and the officious mascot of the Golden Fleece: Saul Goodfellow, the pub's most (shall we say) permanent punter. He has his own blog, his own Twitter account, his own YouTube account and he is prominently featured on their Facebook page. He is thus a very modern ghost, whatever his age might be. And a face and overall demeanor that gives you both a pleasant chill and a chuckle. He is a good fellow all right.
Posted by Guillaume at 13:39

Saul Goodfellow made me laugh -- how does he find the time to be so active on social media? Well, I guess he does have all of eternity . . . .