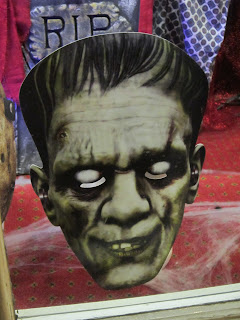 So this is today's countdown to Halloween post. I don't know if it is because I discovered last summer in the town of Marlow the home of the Shelleys, where Mary Shelley completed the writing of Frankenstein, but it seems that this year's countdown to Halloween is marked by a rediscovery of the novel. I haven't re-read it yet, but when I was in Montreal, I stumbled in a second hand bookshop upon a book of essays about the myth of Frankenstein: Frankenstein (Figures mythiques). It has become part of my Halloween reading list. And it is a fascinating rediscovery. I am maybe one of the few people who first discovered the story not through its many loosely based adaptations, but directly from the original novel, when I was a young teenager. Like I mentioned here, I don't consider Mary Shelley's most famous to be pure horror story. In fact, I think it is more supernatural tragedy with a hint of what would later be called science fiction (although I'd argue that the scifi elements are completely involuntary). Still, because of the icon that the creature and his creator has become, because it is an essential part of Halloween imagery, it deserved to be mentioned here. Still, I recommend to everyone to discover the novel in its own terms, forgetting the many adaptations.
Posted by Guillaume at 15:10

I agree that the book is a lot different from the adaptations I've seen...there's still room for someone to do a perfect movie version! The same could be said about Dracula too!

Dracula is my favourite horror novel! Bare none. And I wished it was adapted faithfully. I don't think it will happen, sadly.

I read it when I was pretty young, it really scared me and I vowed never to read it again!

I love the book and I love the movies as well! I also did a GIF of the Creature http://diegbdie.blogspot.it/2014/10/the-experiment.html