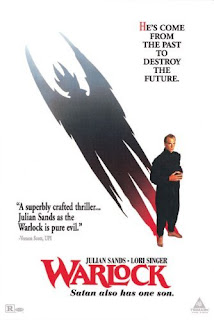 Tonight, for my countdown to Halloween post, I want to plug a movie. And it is actually a bad, sometimes even a terrible movie. I am talking of course of Warlock. And the ironic thing is, however schlocky and low budget it is... I can't help but enjoy. It is cheap (very cheap), has lousy (very lousy) not so special effects and is basically a complete rip off of The Terminator. Julian Sands is basically the T-800 turned into a... warlock from the past instead of a cyborg from the future, and with a British accent instead of an Austrian one. And a cheesy black outfit. Like for many 80s horror movies, it seems that all their effort and budget was put in the poster. Yet I remember the excitement I had when I first saw the poster, in the very early 90s I believe. It looked like a horror movie with an attitude and style (especially style), what with the handsome yet sinister main character. I couldn't wait to watch it. I was sold before I ever saw the flick and how bad it was.And when I finally watched it, I don't think I ever noticed that it was a turkey when I watched it, on October 1990-something.

Maybe I am being unfair. It's not all bad. But it's very bad. There are some elements however that are almost brilliant in their concept. And I should not have said it is a rip off Terminator: it also shamelessly steals from Highlander, The Omen and probably a few others. Just for the various influences, it is an almost admirable movie.And there is a lot to love in it. What I love about Warlock is even though it fails on so many levels (because it never tries), it stumbles to work beautifully on many others: Warlock has far more personality than the T-800 he apes and in spite of the low budget film Julian Sands has incredible presence and is a very effective menace. Warlock has also far more personality than a slasher's villain, while remaining threatening, often far more than them too. He has an attitude, self assurance that is simply chilling. He can have conversation with his victims before killing them, which he does with such detached coolness. There is also a large scale, epic even side to the plot: the Warlock is in effect the Antichrist, or an Antichrist wannabe, chosen by Satan to destroy the world. The scope of the story is betrayed by the movie's budget, yet it is still a strong motivation. Thematically, it also channels into old myths and Christian fears of the Apocalypse and pacts with the Devil. And however ludicrous the movie is and gets, it keeps a straight face, it never intentionally falls into self parody. I don't know, I just love Warlock. In fact, I enjoy it far more than most of the movies it rips off. So I am leaving here the trailer and recommend it strongly to you.