The Guardian in the Graveyard 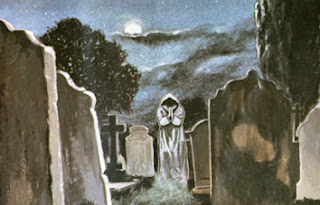 For tonight's countdown to Halloween, I present you another ghost, but a specific type. This image can be found in All About Ghosts, the schlocky paranormal book that haunted (literally) my childhood and fired up my imagination. You can read more about it here. I found this image particularly haunting (excuse the pun). This cloaked phantom is a graveyard guardian. According to the book, unlike what many think, you will not find many ghosts in a cemetery because ghosts haunt the place of their death, not their burial. Only one ghost exists in the graveyard: the graveyard guardian, the spirit of the first person to have been buried in it. So he protects the place against troublemakers and evil spirits (who should have been haunting their place of death anyway, right?). And the book added that in ancient Europe, they sometimes sacrificed a living person to make sure the graveyard had a guardian.

Now what I wonder as an adult is: where the heck did they take their info from? I am to say the least very skeptical about this claim. That said, as a child and even now, I found and find the idea fascinating. I once blogged that the issue with ghosts in scary stories is that they are all appearance and represent no physical menace. They may induce terror, but have no claws to shred with or fangs to bite with. While this is not quite true and many stories managed to have ghosts that represent at least partially a concrete menace, often the ghost is an appearance. But this one, well, he is a guardian. He must have coercive powers to guard. And he must be committed to his mission, if not fanatical about it. That he might have been sacrificed to fulfill his duty makes it all the more sinister. And there is the image itself. Since I saw it, I think about it every time I walk by or through a graveyard. I would love to read a scary story about such ghost. Or write one, if I can.
Posted by Guillaume at 19:06

Oh, my! I, too, wonder about the source of their information! The days are passing quickly!

That's an interesting idea of sacrificing a living person so he/she can be the guardian of a graveyard. I also believe that people, if their spirit haunts, it'll be at the place of their death.

Ghosts and demons are the only paranormal topics that truly horrify me (which I love feeling). I also think that some writers give ghosts demon qualities. If you haven't already, give The Demonologist: The Extraordinary Career of Ed & Lorraine Warren by Gerald Brittle a read! I loved that book.

That's the thing with a lot of the stuff in that book, it's all so matter-of-fact that it's enough to warp a child's worldview indefinitely!

A story about a graveyard guardian would be a good read...

Here's something interesting: The 1990s toy line called Monster In My Pocket, in its fourth series ("Super Scary") had a figure called "Grave Watcher", which it described as an "Uneasy spirit who can't rest since his grave was robbed and vows to protect all graves from thieves". All of the figures in this toy line were based on myths, legends and folklore, in some form or other.