I miss(ed) The Great Pumpkin 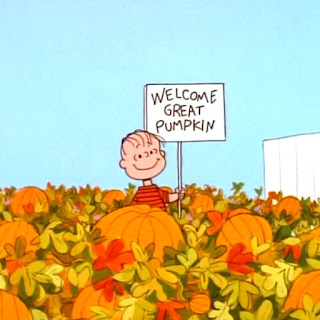 I found this image on my Facebook feed, announcing It's the Great Pumpkin, Charlie Brown on the 20th of October on ABC. I would have missed it anyway, but it means I missed telling my American and North American readers to watch it. Shame on me and accept my apologies. It does not air in England, or at least I have never seen it being featured on any channel. I have not seen the cartoon in ages, while it was a classic I never missed when I was living in Québec. We had it taped on VHS to make sure we would never miss it once. Now my brother PJ has it on DVD.  It is one of the few non horror movies I have on my to watch list for Halloween. You can read a post on it here. And you can read a brilliant analysis of why this cartoon is so clever and indeed profound here. Actually, thinking about how often I missed it since I live in the UK, I have decided to get my hand on it. Until then, here is an abstract from YouTube, where Linus explains pretty much what this is all about:

i haven't watched this in years. thanks for the video!

It was a fave of mine when I was a kid too.