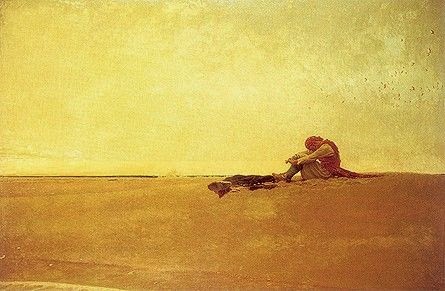 This painting is titled Marooned, it is the work of Howard Pyle, whom I blogged about here. He popularized the rather romanticized image we have of pirates. A character being marooned in a desert island was a common trope in adventure fiction, especially pirate fiction. I am uploading this image here because even though such dramatic event does not happen to common people in our day and age, the state and the painting does echo strongly in our psyche. Once does feel marooned when he longs for holidays, for instance. Which I will have this summer, but not just yet, so sometimes I feel very much like this pirate.

I uploaded it for another reason: my interest for piracy is rekindled every summer. I used to have pirates make belief games as a child, great fun. This year I am going on holiday in Devon, so very close to the sea. I already chose what I would read for my stay, but I might bring another book in case I finish this one and I was pondering about bringing something set by the sea, or in the sea and featuring some sort of pirates. Treasure Island starts not too far from Devon, but I already read it. Which makes me think: I have no idea what book I would bring with me on a desert island. Too many to choose.
Posted by Guillaume at 13:34

i love howard pyle. i have some first editions with his illustrations. i used to collect them but don't anymore.

Love the muted starkness of this painting. Really gives the sense of being abandoned.