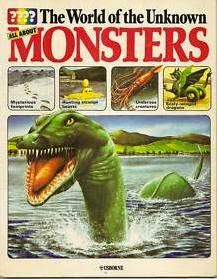 I blogged about this book in French post last year. Back when I was a child, still naive about many things and very much into cryptozoology, I absolutely loved this book. It was called All About Monsters and was as much about cryptozoology as it was about monsters of legends and folklore. It was full of pseudo-science and as an educational book it was utter rubbish, but they had great drawings and in spite of its sensationalist nature the parts on folklore made me discover many legendary creatures that were subsequently used in make belief games. There was another book in the series called All About Ghosts, which I blogged about here and another one about UFOs, which I didn't cared much about.  One of my friends had it, I only had All About Monsters and All About Ghosts.

If the ghosts book was one of favorite reads in the months and weeks leading to Halloween (from August onwards), All About Monsters was the one of my summertime. The make belief games we played around the swimming pool involved giant squids and Loch Ness monsters-like creatures such as the one on the cover. I remember arguing with a friend about the Loch Ness monster because of this very book. The same friend who had the book on UFOs actually. We did not argue whether or not Nessie existed, as we both believed there was a monster dwelling in the lake, but what was his nature. Because of All About Monsters, he believed that Nessie was an elasmosaurus. Because of another book we had read on the subject, my brothers and I were adamant it was a plesiosaurus. But in any case, lots of mysterious creatures showed up in our games. We had of course many medieval fantasy games where the book became an important source of information. So next time I am home, I might revisit it.
Posted by Guillaume at 14:19

I always thought Nessie was female?

@If there ever were a Loch Ness monster, then there may have been a female one, as they'd need to reproduce to survive to our day and age. But I don't think there was one, let alone a colony of them!
@PJ-Ah tiens, je n'avais pas pensé à ça. C'était la longueur du cou qui nous faisait pencher pour le plésiosaure.

I love this genre of books and still read them. I had one called, "Field Guide to North American Monsters" which featured some genuinely creepy stories. "Penelope" an average human woman stranded in the wilderness who was transformed into a gruesome cannibalistic ape by sheltering in a toxic waste container.

Or the boogeymen, clowns that hang around playgrounds abducting children.

And real mysteries, like the Mad Gasser of Mattoon.

@Mantan-Sometimes the most naive or shlocky books or films or what have you are the scariest, especially when they channel into your childhood memories.