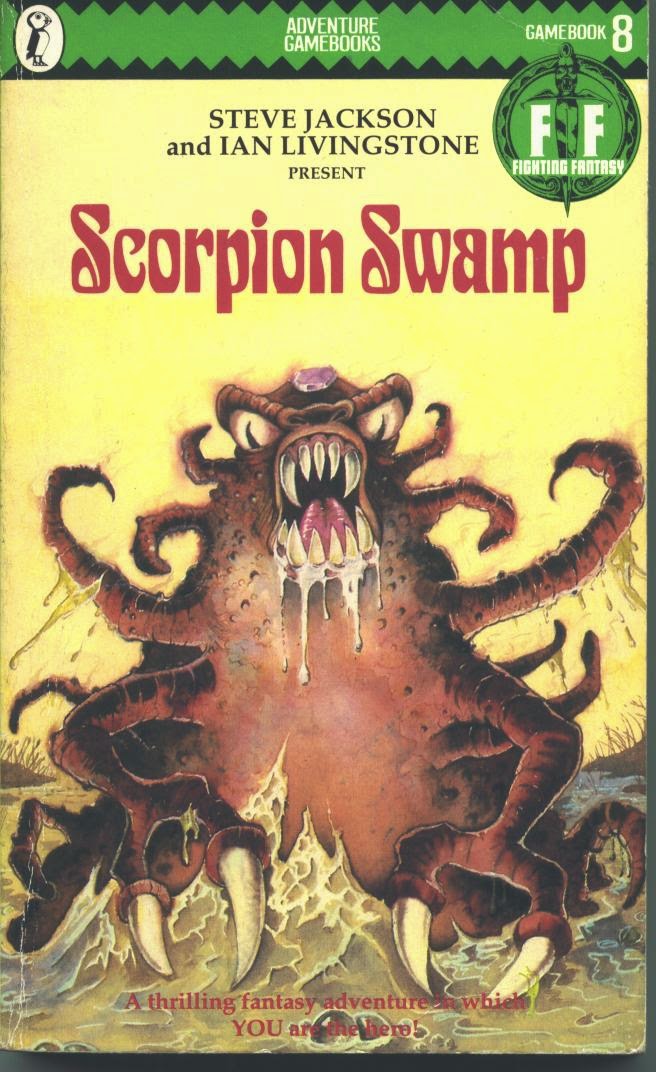 I am starting this post by a question: is it only me, or are swamps particularly sinister? I always thought so anyway. It is full of mold, wet, neither land nor water, with ghostly trees and all sorts of creepy critters. As far as I remember, I always found swamps scary, even before I read Scorpion Swamp, my very first Fighting Fantasy Gamebook. The book only confirmed my sinister fascination with eerie swamps. Maybe it is because of this, even more than the fact that it was my first gamebook, that I am so fond of it. It is supposed to be full of flaws, but I always found it full of atmosphere and in a great setting, where monsters abond. Scorpions, normal sized or giant ones, of course, but also giant spiders, giant toads, "normal" giants and that thing on the cover, Malevolent humans too, some thieves but especially wizards who made the Scorpion Swamp their home. But mainly, I love it for the swamp.

My brothers and I played of course plenty of make-belief games set in swamps, or indeed set in Scorpion Swamp or nearby (the town of Willowbend for instance). Years later, when we started playing Dungeons & Dragons, swamps became maybe the second most important wilderness setting after the forest. We had plenty of monsters in them, but not the same ones as in Scorpion Swamp: there were far more lizard men and hydras than scorpions. All the same, the book certainly influenced us. And it reminds me that swamps are, well, you know, beautifully eerie and deliciously sinister.
Posted by Guillaume at 21:35

i took an airboat tour through the everglades in florida. it was amazing. there were alligators everywhere. it was such an experience. scary but very cool at the same time.

There was a swampy area not far from where I grew up. The mosquitoes were terrible! I didn't like being near it because of them!