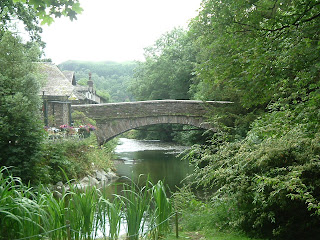 This picture was taken in Grasmere, during our holiday in the Lake District. It never ceases to amaze me that such small places have such amazing views. There is nothing even average about the villages and towns there. Everything looks from another time,

I wanted to put this picture here, just because. Now is just as good excuse as any. I never thought it would be as good excuse as any. I have a thing for old things, and old bridges make no exception. They are like closed doors and old wells, they symbolise the passage to another world. In the Lake District, it was appropriate as we often felt in a different land.
Posted by Guillaume at 22:28