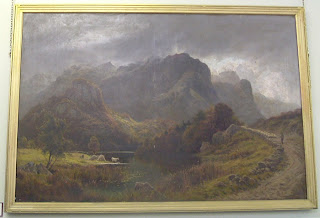 I am shamlessly putting here pictures of our last holidays. This one was taken in the Keswick Museum and I have no idea who painted it or if it represents autumn or a stormy summer day in Cumbria. Nevertheless, it looks like Autumn enough on the picture, from this distance at least.

My wife gave me this BBC article today, saying that autumn will arrive late this year. The article does not mention if it is going to be warm or cold, but it says that the leaves will fall later and that the fruits will not be ripe early. It does not look like autumn will be late right now, if anything it looks like it is peeking through already: the weather hasn't been summery since the beginning of August and (this might be explaining that), some trees already had a few leaves changing their colour. Not many, but enough for me to notice them. The heatwaves of June and July certainly seem like a distant memory. It is not like 2007, when we barely had a summer. Ironically enough, Autumnwatch started later that year, in November if my memory is correct. It disappointed me.

August is the month when I prepare myself mentally to the next season, trying to forget that the holidays were going and that I was going to go back to school. I was trying to look forward to the good sides of the season. As a teenager/young adult I used to play Call of Cthulhu, it was our "end of summer" game. One day I will blog about this one (yes, I am sometimes a total geek). And there was also the harvest. I hope the apples, berries and others don't come too late this year. I could go fruit picking right now.
Posted by Guillaume at 20:49

Hmmm....well I don't want to hear that! I do not wish for Autumn to arrive late this year. For I am planning on traveling to New England in the beginning of October and I want the leave to be as stunningly beautiful as they were last year. I have LOTS of photos to share of the glorious autumn foliage. But I am trying to save some stuff for the Halloween Countdown. Finding stuff to post for 31 days straight is hard. But if Autumn comes late, the color may not be good and the air may not be crisp enough. Geez...I hope it's only late on your continent...ha! Of course in FL it doesn't come until around January actually. That is when we see the leaves change color here. Pathetic!

Don't worry too much about how late the season will be. It is all a matter of perspective: some people think it is deterined by astronomy, some by seasonal changes (cooler weather, harvest, etc.). If colours and ripe fruits arrive later, it does not mean that it will be a heatwave. And right now, it doesn't really feel like summer much anyway!