Living in an atmospheric town 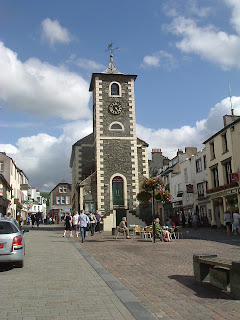 Before I start, a disclaimer: this is a picture of Keswick, not of the town we live in, or anywhere nearby. I was walking in town recently (I seem to be doing that often these days), which of course made me thoughtful. The town I live in is not half as bad as sometimes I thought it was, when I was bitter and unemployed. Now it is a bit of a haven for many reasons. I feel home here, maybe not quite when I wanted to end up at first, but I warmed up to it.

It is certainly a pretty, picturesque town, at least in some areas. Not nearly as much as some towns we saw on holidays here and abroad, but it is still pretty. Back in 2008, when I was bitter and unemployed, my wife and I considered moving, closer to her working place. Since I had plenty of time and I found the place a bit claustrophobic, I was the one going around visiting flats. We decided to stay, partially because we didn't find any apartment that was better than our lovely attic, but it was also because the towns around were a bit bland. I didn't see it like this then, but we live in a place full of charm. In the end, we decided to stay.

When I first came here for an interview for that job I ended up getting, losing and hence hating (although I don't think I ever liked it), I loved the town badly. It was early October (I am easily charmed in October), the colours were magnificent, I was feeling confident about the position, before and after the interview, everything seemed right here. I do not have this idealised vision anymore, but since we see that we are likely to move I find it more attractive, akin to how I saw it the first time. I hope we will stay long enough to see it in October.
Posted by Guillaume at 20:28

Ooh...it is pretty there. Very quaint actually. I hope you make to October....everything is infinitely better in the month of October! :o)

I have a similarly love/hate relationship with our town, Guillaume. We love our house and where we live so much, but the greater town is often so dreadful & embarrassing (of course I mean the people in it!) It would take a lot to make me leave though! Thoughtful post. I'm glad you're enjoying your job xox Rachel

@Wendy-Yes everything is prettier. It is a beautiful month.
@Mozart's Girl-Thanks. I think my love for this town is circumstancial.