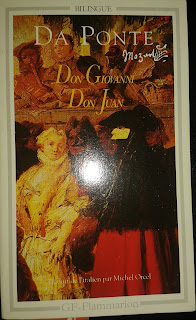 As those of you who read my posts in French know, my brother PJ is in Prague these days and tonight he is watching/listening to Don Giovanni by Mozart on the stage that first produced the opera. The performance might actually be over as I am typing this. To say that I envy him is an understatement. I am bleeding jealous. Don Giovanni is my favourite opera and I also consider it the greatest ever written, bare none. So these last few days, I have been dreaming about future time in Prague to do exactly that and been listening to the music a lot. I also read through the libretto by Lorenzo da Ponte (yes, I have it, see the image on the left). But I mainly listen to the arias on YouTube. I wanted to upload one here, I was not sure which one to upload as I have already uploaded many. So I decided to upload the duet La ci darem la mano, which I already did years ago, but followed by Ah! Fuggi il traditor!. So it's a double bill. Anecdote: I did sing the duet when I was learning opera, it was the one and only duet I ever sang actually. Sadly, I never did in front of an audience. On the plus side, I was never chastised by a Donna Elvira looking like Cecilia Bartoli.

i envy him too. i love opera.

A treat for your brother indeed and in such a beautiful city.

The Estates Theatre is also an incredibly gorgeous place to be in. I paid for a box too, for the full, above ground, no one in front to block the view, experience. Absolutely worth every penny.