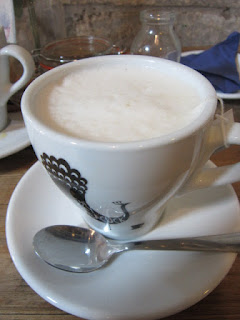 Well, I am not talking about the fog itself, but a drink from the Perky Peacock, one of the happy discoveries I made at the very beginning of my stay and maybe my favourite coffee shops in York. London fog is a tea made with Earl Grey, with frothed milk and vanilla essence. The frothed milk gives the cup a very foggy look, as you can see on the picture. As you know, I find milk in tea utterly barbaric. But I was curious about its name and the idea of vanilla flavour was intriguing. So against my general principle, I ordered one. I guess I have little principles. And yes, I actually enjoyed it. That said, I wouldn't take it every day, I still prefer my tea very black. 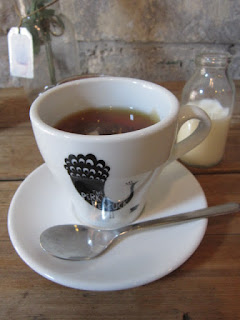 And I did also have some true, proper Yorkshire tea at the Perky Peacock. The picture on your left was actually one of the first photos I took of my whole stay and the very first tea cup I had in my first day in York. It was only fitting. And if you can see milk in the background, for the record I had it by itself afterwards. As milk should be drunk. The tea was taken all black, as it should be. I will blog more about the Perky Peacock, but suffice to say now that it was a great experience in an amazing setting. And that the London fog was actually quite drinkable.
Posted by Guillaume at 12:29

I have a friend who's hooked on London Fog tea, so I tried one once and it was indeed pleasant. I'm not a fan of milk in tea either but if it must be present, I prefer a chai tea latte.

Oh, I love that name - Perky Peacock - and I love that cup of tea! We prefer our tea black as well, but then, we are Americans and have probably really ruined a good cup of tea already.:-)