Flight from the dark 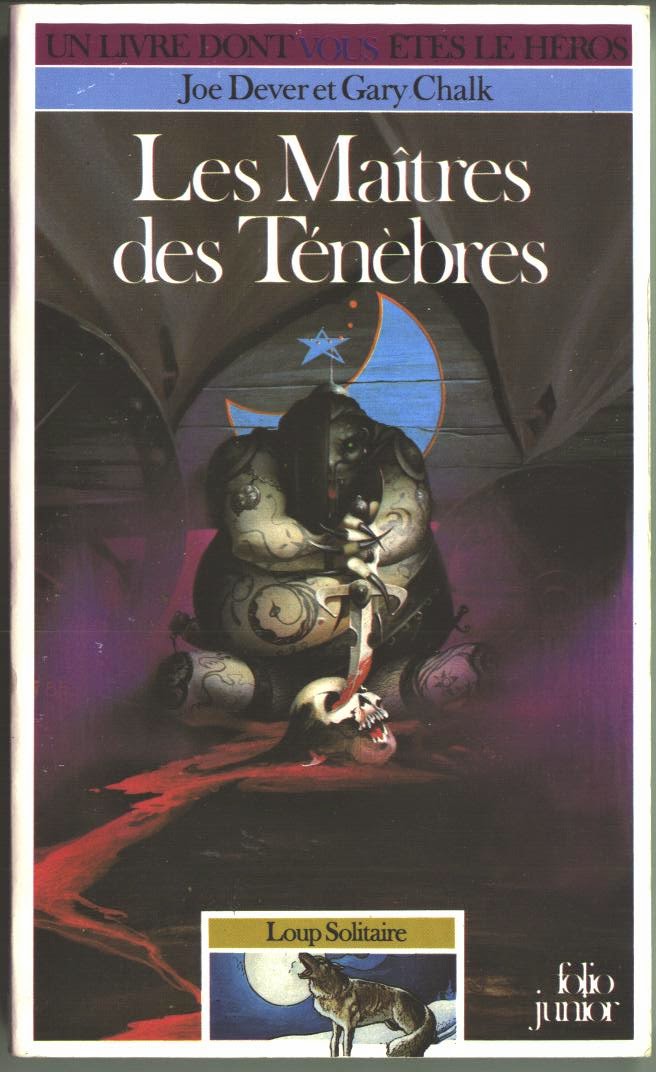 Here is another nostalgic post about a gamebook from my childhood. You see on the left the French cover of Flight from the Dark of the Lone Wolf saga, written by Joe Dever. I first played/read The Chasm of Doom, but it is Flight from the Dark that caught my attention. A friend of mine had it and I saw it on the table of his living room before going to school. In French the title was Les Maîtres des Ténèbres, translated The Lords of Darkness, a free translations of the Darklords of the series, who are the nemesis and the ancient evil the hero (played by the reader) fights. Both the title and the image on the cover struck me then. A fat demonic  creature plunging a dagger into the eye socket of a skull, a stream of blood running from it. Pretty dark for a children book. Very dark in fact.

Anyway, so I was fascinated by the title and the cover, enough so before I ended up reading/playing the book a few years later, its plot became the starting point of many make belief games my brothers, my friends and I were playing. It is a simple one: after the destruction of the monastery where he was studying to become a Kai master (some kind of priest/ninja/Jedi Knight) by the Darklords, destruction of which he is the sole survivor, Lone Wolf (the hero) takes the road to the capital city, to warn the king of the upcoming invasion. This is of course heavily inspired by Lord of the Rings and Star Wars and I guess that's what attracted many young boys my age to the book series. The story is linear enough so it is easy to follow and not very difficult. Unlike many gamebooks set in a medieval fantasy world, most of the action happened outside, in forests and on the road, instead of an enclosed space like a dungeon. And Dever's prose may not be the most sophisticated, but for a young reader the story and the environment were very atmospheric. It is one of the many gamebooks that later influenced our Dungeons & Dragons games. I think it certainly played a part in me choosing to play a ranger. Years later, I found it again in France, so I bought it, out of nostalgic feeling. When I get a D&Dr craving which I cannot satisfy, I still use this book as a fix.
Posted by Guillaume at 23:49