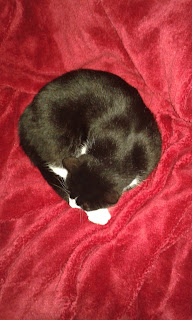 I thought I would blog about Domino again, give you some updates about him (even though it was not long since I last blogged about our cat). Since his accident in January, we have not taken him out of the flat, out of fear that it would happen again. When we move house, we might change this if we can find a place where he can remain outside, away from the road and overall safe. Although I understand there is no completely risk free environment. Overall, he did not mind the change. First because he was traumatized by his accident, then because he ended up liking the place. He does ask sometimes to go out, but never insists much. He spends his time here napping, exploring and re-exploring the flat (his favourite spot changes regularly) and playing with his many toys. Because now that he lives inside, we want to keep him active, so he has many toys, most of them looking like mice and birds. I sometimes have the guilty feeling of keeping a predatory feline in a cage, but at least he does not massacre birds like he used to. He is safe for himself and others. And he does feel safer here too, I think, at least sometimes. Domino does not like noise, so when it was stormy again last night, he seemed grateful to be inside.
Posted by Guillaume at 13:10

what a sweet kitty! better to always be safe. it's a scary world out there for a cat!

that accident will keep him happy indoors at least for a while,, I often wonder if cats mind being indoors all the time, its a balancing game for sure,, I agree with Joyce, its a scary world out there for cats. We always had cats that came in and out,, they did kill their share of birds, mice and chip munks and it did bother me,, but that was in the country and I've never had a cat in the city,, with the traffic and crazy people in town I think its best to keep the cats in,,or put them on a leash and take them out, or have a fenced in cat run,, our friends have a beautiful cat area with a pet flap that they can access,, cats are such smart creatures I just wish we could speak their language!!Then we would know,,

All the cats we have owned for years are inside kitteh cats, they get too beat up outside and we live on a busy street..Our cats live contented lives the no-kill shelter reminds people who adopt to only keep their kitteh cats inside and will not let a person or family adopt without a proper home or flat or apt. to live inside, they come to your place of residence and show you what to do, it is easy and the kitteh cats live stress free and happier..!!!!!!!!!!!!!!!!!!!