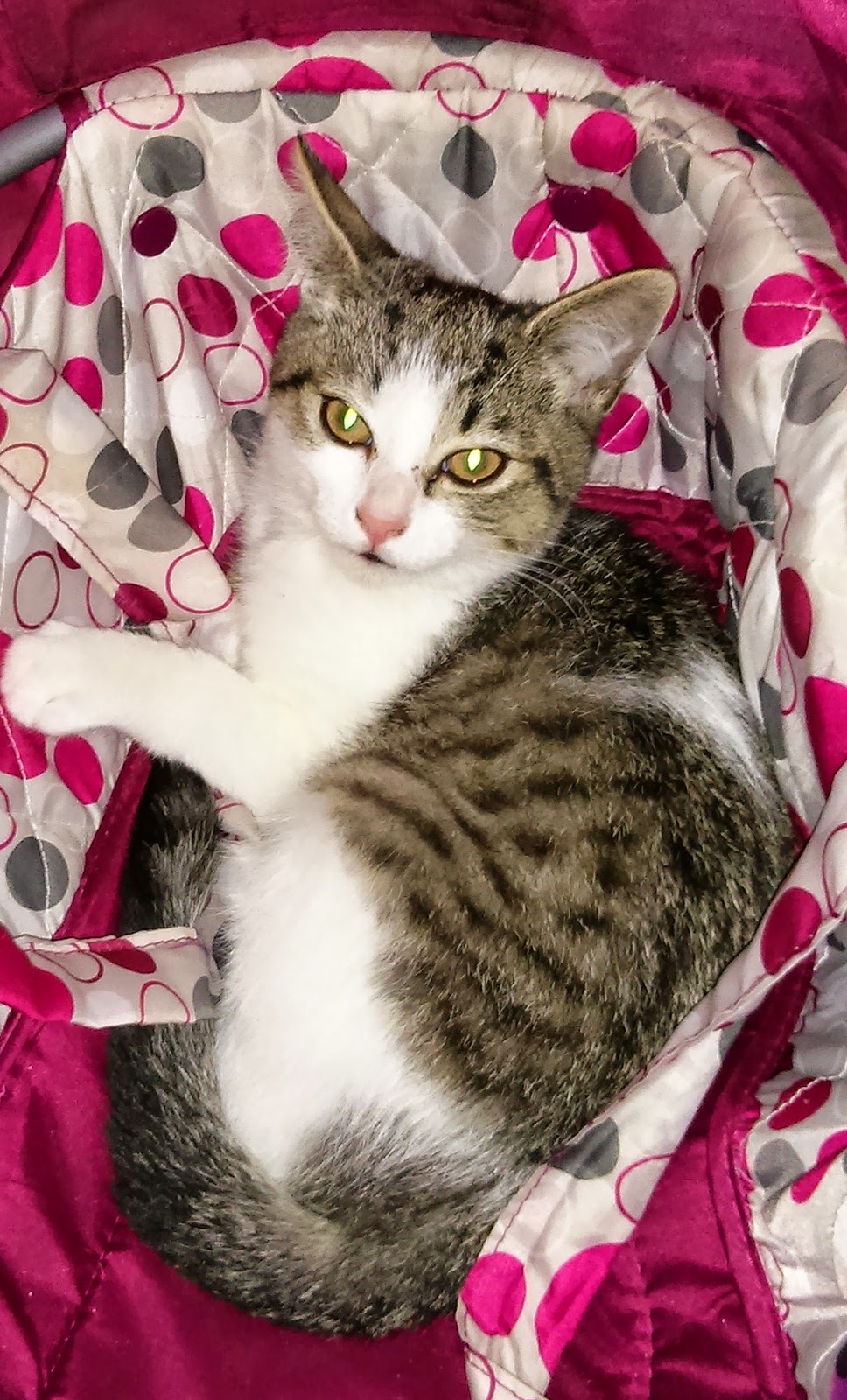 This is Buffy, the cat of the daughter of a friend of my wife. I blogged about her before, because apparently I have the same eyes as hers. Who is currently our host for a week, because her owners are going away on holidays. We accepted not only to be helpful, but because we thought it would be nice to have a cat in the house again. That said, I am not sure we should have said yes. Buffy is cute, but she is no Odin. And I don't think she is enjoying it here very much. She whined a lot when her owners left and she discovered that she was going to be here for a while, now she is just lying down behind the washing machine. But what saddened us the more was to see the daughter crying non stop when she had to leave her cat. We are trying to help them, yet we feel guilty about it. The girl also left us some very strict rules, which I wanted to write down here, because they are so darn cute:

1.She needs to be played with once a day in the afternoon.
2.You can't pick her up or she will scrach.
3.She is not alouwd to lay down on boys as shes a girl.
4.She needs to be fed 3 times a day biscits in the marnin, biscits in the evning and meat in the afternoon.
5.Her litter bax neds to be cleand out after she poops.
6.Only let her go in the kitchen and living room Do Not let her in eny bathrooms or bed rooms if you do I Will be very angry.

Thank for readin the Rulse of Buff"

Cute isn't it? She does not want Buffy to get too attached and wanting to stay here. I don't think there is any danger for us to keep Buffy anyway. I love all cats, but some cats more than others and I do think there are cats that are meant for us and cats that are not. I still hope she will warm up to us.
Posted by Guillaume at 21:21

Well, what cat COULD be another Odin? Enjoy Buffy in her own right and do not let her lay down on any boys, LOL!

Oh my goodness sakes alive, she is cute, I like the rules for Buffy, our cats trained us and we listen to them, they act like they are dying when they have to go out when it does rain..so litter boxes are spotless and many..They lie wherever they seem to like and usually it is on my hubs lap when he is trying to read a book or a newspaper..He is crazy for greyhound dogs not really cats but is tender and loving to all of them..They seem to gravitate to him instead of me the poop scooper and food and water attendant..They rub up against me when they want treats I get from the grocery store on sale, they know the sound of the bag, they have me well trained..Well enjoy your Buffy girl I am sure she was and is not like Odin is she? We lost two longtime kitteh cats one week apart two years ago this july, I cannot really get into cats anymore they just trained me well..enjoy miss buffy!

@Debra-No other cat can be like Odin. It was a short stay for Buffy, but I did enjoy her presence, even though she did not enjoy it as much.
@Anonymous-Thank you for reading my blog and commenting! May I ask where/how you found it?