The Divine Comedy for children? 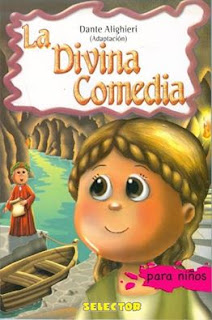 I found out of total chance this image on Facebook, apparently of an adaptation for children (and I think in Spanish) of Dante's epic poem. Okay so seriously, tell me, does this book cover fit well the above verses, which, translated into English, mean: "Midway upon the journey of our life, I found myself within a forest dark, for the straightforward pathway had been lost." I mean really? Is this a joke? I have been obsessing about it since I saw it in my timeline. I have a confession to make: I don't like Dante much. His masterpiece is for me a disgusting display of devout Catholic propaganda, plagued with antisemitism. But one should at least respect his importance and not turn his work into... Well, into this. Because this is worse than my worst nightmares. A pastel Hell? If it looks like this, I am really afraid of ending up in it.
Posted by Guillaume at 18:37

Or children are inappropriate for a journey through Hell... not to mention Heaven.