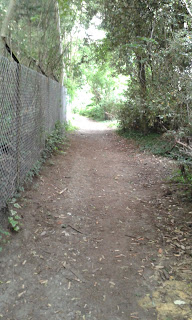 As you know, I have been in our new home for about a month now. And a new home meansa new commute to work as well. I say new commute, and not that much has changed. We still live in the same town. I still take the train, from the same train station and it takes pretty much the same time. According to Google Map on my phone, 16 minutes exactly with the shortest road, instead of 15. Nevertheless, it is a different commute. We live in a different part of the town, for one. And not as fancy neighbourhood as well. Such is the price to pay to be owners. So the streets I take to go to the station are not as picturesque. I don't have to walk near the town centre, so they are far quieter as well. That said, I have to see far more greenery, which is always nice. The first part of my walk to the station every morning is via the pathway which picture you see on the right. Not the most charming path, but a nice one all the same. At least it's green. Then after walking long a street, crossing another I walk through the business park. At least it looks nice, as far as business park goes. Then I am at the station and everything is well in the world. I do miss being able to stop in shops on the way back, but this way I don't get delayed and I go straight home after work.
Posted by Guillaume at 21:40

They say a change is as good as a rest ~ and very soon there will be a small, joyful bundle of a reason to be home all the sooner from work.