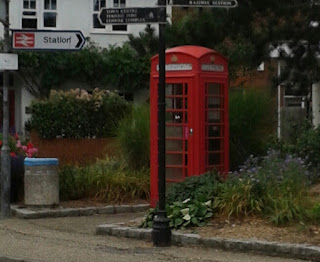 There is something new I learned not long ago about the town where I live: it could actually qualify as a village. I always thought it was a small(ish) town, but because of the relatively small amount of population in the last census, smaller than some other settlements that are labeled villages, it could as easily be one. And thinking about it, I thought it makes it even more charming that I live in an English village. And a typical one at that, if such place still exists: I was walking near the train station with my wife this weekend when she pointed to the red phone box, the one of the first things you see when you leave the place and she said: "Look, this is so British!" If even a British woman finds a place so British... It has to be very British indeed. And thus, not knowing it, my wife said a great unknown line. Anyway, town or village, I grew very fond of this place and I am happy to label it an English village.
Posted by Guillaume at 19:23

I live in a village too, and am very happy to do so. HM restored City Status to the village in 1994, however, I still say I live in a village!
I love your photo of the bright red phone box, you are so lucky to have one that hasn't been replaced by the modern ones!

I couldn't believe how stereotypically charming an English village was when I was in England a few years ago. Such a different feel than its Canadian equivalent, lol.