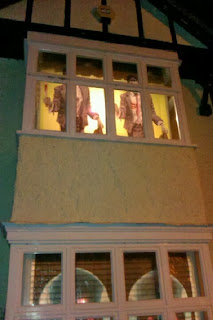 Tonight I went on a walk, to see this ancient old tradition of trick-or-treating. It is one of the ways for me to connect to the spirit of Halloween and it brings me back to my own childhood. I visited again the house of this American family I visited last year. As it was earlier in the evening they were much busier. Last year, they had treated me with a glass of wine ("Witch blood from Northern Italy"), but this year because I have been sick today I did not wait until I was offered anything. I just told them I had to stop by and see their display. It was impressive: every window had an image of a skull or an undead (holding a machete or a butcher's knife of course), two giant inflatable black cats were also on display and there was a black tent full of horrific decorations and with gloomy music to top it up. Their children were hosting too and scaring their fellow trick or treaters. I love the way they do it, huge and unapologetically extravagant.

Other places were obviously more modest, some only had jack-o'lanterns (you can see some of them here). That said, I don't know if it was because I got out earlier, but this year it felt like the whole town was really celebrating, people were really enjoying it and there were many children, going at every door, all laughing, smiling, screaming, playfully scared when they were. Even the parents were disguised! Trick-or-treating, at its best, really brings up community spirit to a neighbourhood, it makes people share. Share treats obviously, but also share a moment, celebrate together. If I was in the right place, not on the top floor of a quiet block, I would try to celebrate it like this and make it big and excessive, as much as I can anyway. With treats for children and adults.
Posted by Guillaume at 21:26

I love handing out candy to all the little trick or treaters! Some of them are so cute in their costumes!

Thank you for commenting you two. It seems so far away already.