Skulls in the fireplace 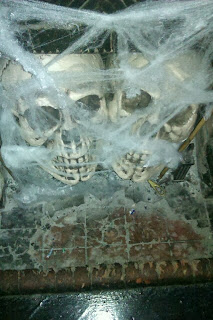 Here is the post for tonight's countdown to Halloween (although I may write one more). Like yesterday's, it is somewhat about a pub. This picture was taken last year, in a nearby pub, a week or so before Halloween. I was walking back from work and they were putting up their decorations. As I was taking a few pictures of the outside, the landlord invited me to visit the insite, already fully decorated. He was very warm and friendly, telling me about the special events on the weekend before Halloween and the Halloween party that was planned. I guess he wanted to be nice with a future punter.

To tell you the truth, I don't like this pub much. It is set in a beautiful old house, like there are so many in England, but the choice of drinks is rather uninspired and uninspiring, they didn't do much with the building and the inside is just bland and it is a rather rough place, where there has been a few fights and even some people stabbed. I only went there and stayed for a drink a couple of times, I think I could still count them. That said, I went quickly for a glance and I have to say, they know how to make a place atmospheric during Halloween. I took a picture of these two skulls in the fireplace, covered with cobweb. The large skulls are not human, they could belong to giants or ogres. Which makes us leave the world of horror fiction to enter the ones of old folklore and maybe even medieval fantasy, but nevertheless, it was a beautifully sinister display. I hope it gives you inspiration to write a horror story, or any kind of story.
Posted by Guillaume at 20:17