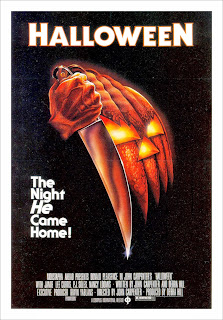 Here is tonight's countdown to Halloween post, and also a reminder for every Halloween aficionados about tomorrow. I was wondering what to blog about, then an article of the BBC I found this evening reminded me that tomorrow is the 35th anniversary of Halloween by John Carpenter. Last time I blogged about it was on the day of its 30th anniversary, although I think I was completely unaware of it. It is one of my favourite horror movies, the first and maybe only true great slasher (unless you count its father Psycho). I love everything about Halloween, the simplicity and sobriety of its plot, its creepy score, its atmosphere, its flaws even (the low budget shows, but somehow it never betrays the film), its dark humour, never out of place, its ways of embodying everything that is at the core of Halloween. It had sequels, none nearly as good as the original, often just as bad as the many, too many clones and bastard children Halloween created. To celebrate, I will of course watch it. I encourage you to read the BBC article, which is quite interesting and until tomorrow, to put you in the mood, to watch and listen to the opening credits, which you can find below.