A black cat for Halloween 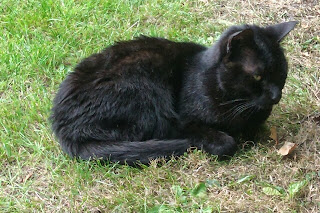 This is my second countdown to Halloween post today, and of course it had to be about my feline friend Odin. Two days ago, when I reminded people on Facebook that there was only one month until Halloween, one of my friends mentioned: "And you already have a black cat". It deserved to be a great unknown line, it also reminded me that, well, he was right, as there is a black cat in my life and black cats do belong to Halloween lore. So it made perfect sense that I blogged about Odin in one of my countdown posts.

Of course, whoever says black cats and Halloween says witches. There is a witch in the neighborhood, however and ironically enough she hates cats in general and Odin in particular. She keeps on talking to people about that bloody cat, but she does not dare to confront me. I have heard that she thinks cats bring vermin. I had evidence to the contrary no later than tonight, and in quite a dramatic fashion, as I have a phobia of small rodents. Rats in particular, but to a lesser extend mice and whatever is their direct relatives. I was checking on Odin, when I saw him getting out of his dwelling... with a mouse in his mouth. It actually gave me a shock. Yes, I am that much of a wuss when it comes to mice, I am afraid of them, in a horrified way, even when they are dead and thus very much harmless, hanging down from a cat's mouth. You should have seen my friend's look of surprise when he saw me scared, there was something so ironic and mocking. He came back to me later, asking for cuddles. Anyway, this episode reassured me: Odin may be partially blind from one eye, he can still hunt. The vet had told me that, I had difficulties believing her.
Posted by Guillaume at 22:28

The mighty Odin hunts as he pleases.

Oh yes he does.