Hobgoblin (the Unofficial beer of Halloween) 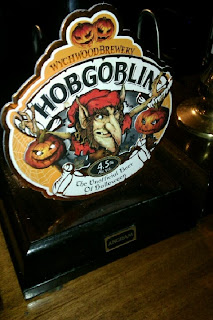 As my second post for this year's Halloween countdown, I have decided to plug again the Hobgoblin from Wychwood Brewery. It has become a yearly tradition (my post about it last year here). Unlike what I had said in 2011, they labeled themselves not the official, but the unofficial beer of Halloween, as you can see on the left on this... official label. Nevertheless, unofficial makes it in a way more official. I took this picture in a nearby pub. Wychwood makes a lot of publicity associating the beer with Halloween. But it is available all year round. Every time I have one, no matter when, it puts me in a Halloween mood. Now this year, I will drink it much later in the month, as I am going home for two weeks. Although I first drank Hobgoblin in Québec, back in 1996 to be precise. So you may find some wherever you are around the world. If you ever decide to write the scary story, I suggest you take one for inspiration, especially if you set it in a pub.
Posted by Guillaume at 19:37

Pretty cool label. I've been sampling the various pumpkin ales hitting stores this year. Seems like this year has had fewer available, at least locally.

I've never had Hobgoblin, but I'd LOVE to try it. I'm a bit of a beer snob, so I'm always on the lookout for decent brews.

Our liquor store used to carry it, but no more. Nova Scotia is sadly lacking in Halloween-themed beers. :/