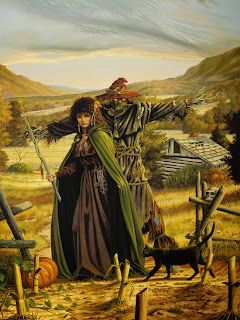 I did not blog about Dungeons & Dragons for a little while and thought it was time to blog about it in relation with Halloween. This picture is of course from Larry Elmore and is aptly titled Eyes of Autumn. You can see what is probably a witch guarding her domain, holding menacingly a staff, her black cat (familiar spirit?) walking rather indifferently on the side. Beside her, a pumpkin, behind her, a menacingly looking scarecrow, whose head is reminiscent of a Jack O'Lantern. You ca see the eyes are shining, which would indicate that it is magically animated and could be an adversary itself. In a way, this image is reminiscent of Early Snow. In any case, Eyes of Autumn is fitting for this time of year, as it is not only heavily influenced by autumn, but also by Halloween.

Which leads me to the relation my favourite holiday and my favourite game have, at least in my personal experience. Back in the days when my brothers and I could play at D&Dr all year round, Halloween was a special time to enjoy the game. Of course, when one plays Dungeons & Dragons, the time of the year on the calendar does not necessarily fit the game's calendar, which is susceptible to change much faster. Nevertheless, in the early years we often managed to fit at least some of our gaming session with the time of year. The atmosphere, the monsters we fought, they were modeled after eerie themes and often belonged as much to the horror genre than medieval fantasy. We even had an equivalent of Halloween in our game, the Day of the Dead, celebrated on October 31st. In more recent year, in our current epic campaign, we managed to take hold of the artifact the villains wanted to invade the world on the 31st of October. Ironically we played this game during Christmastime. It was a great game, but I do miss the time when we were lower levels and could travel in woodlands, to find in the middle of nowhere a small cottage, inhabited by a sinister lady.
Posted by Guillaume at 19:55

That's an amazing piece! Has a VERY Halloween feel to it!