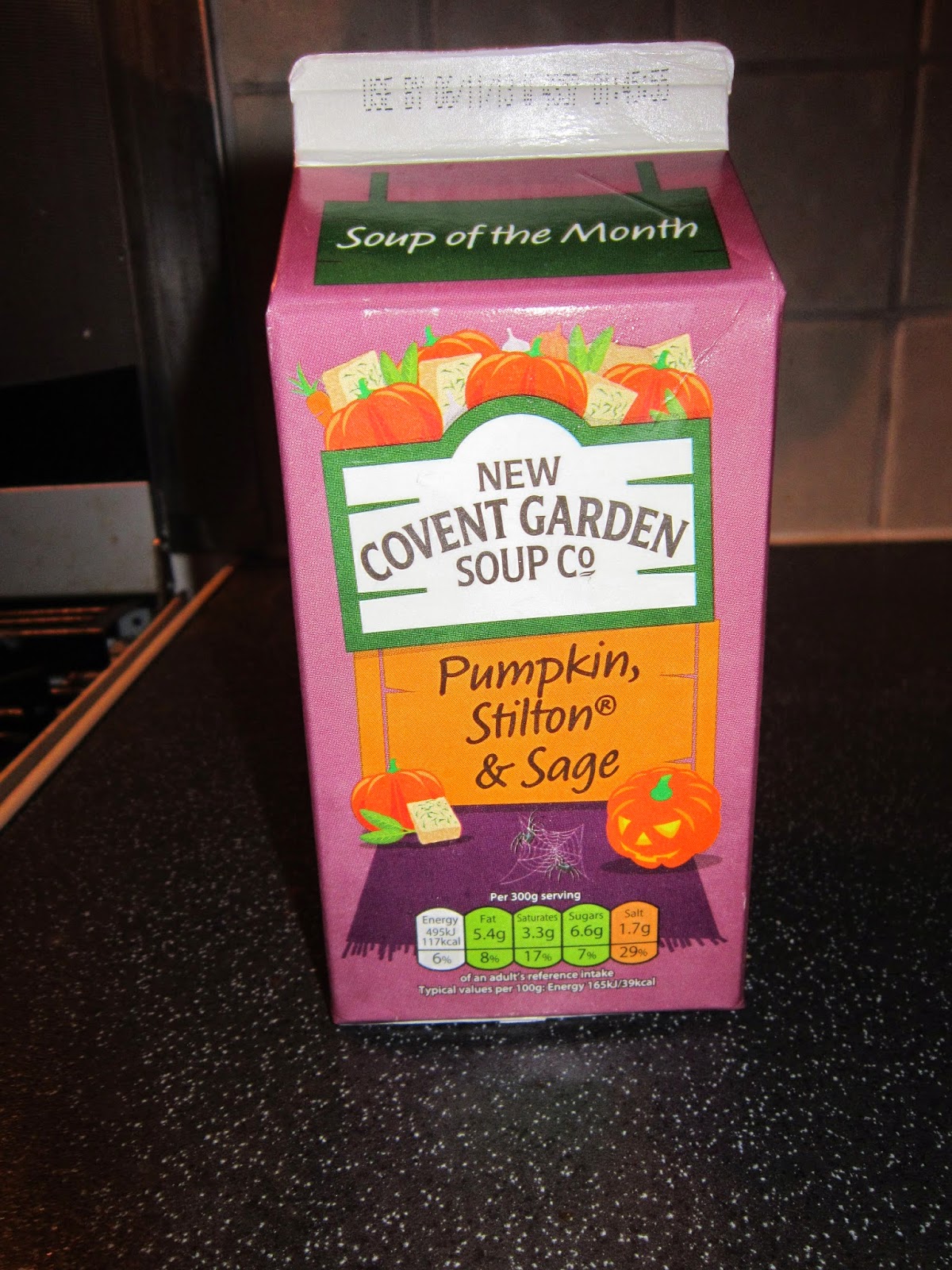 This is tonight's Halloween post, about my new Halloween meal: pumpkin soup. As a child, before my brothers and I went trick or treating, we used to eat pizza for our early supper.But now as an adult, and as an expat living in England, I eat the soup of the month of Covent Garden Soup Co on Halloween night, and in many nights leading to it. Usually, their special October recipe is Halloween themed. It has pumpkin with whatever else. I accompany it with garlic bread, just to be decadent. This was last year's soup, with Stilton and sage. 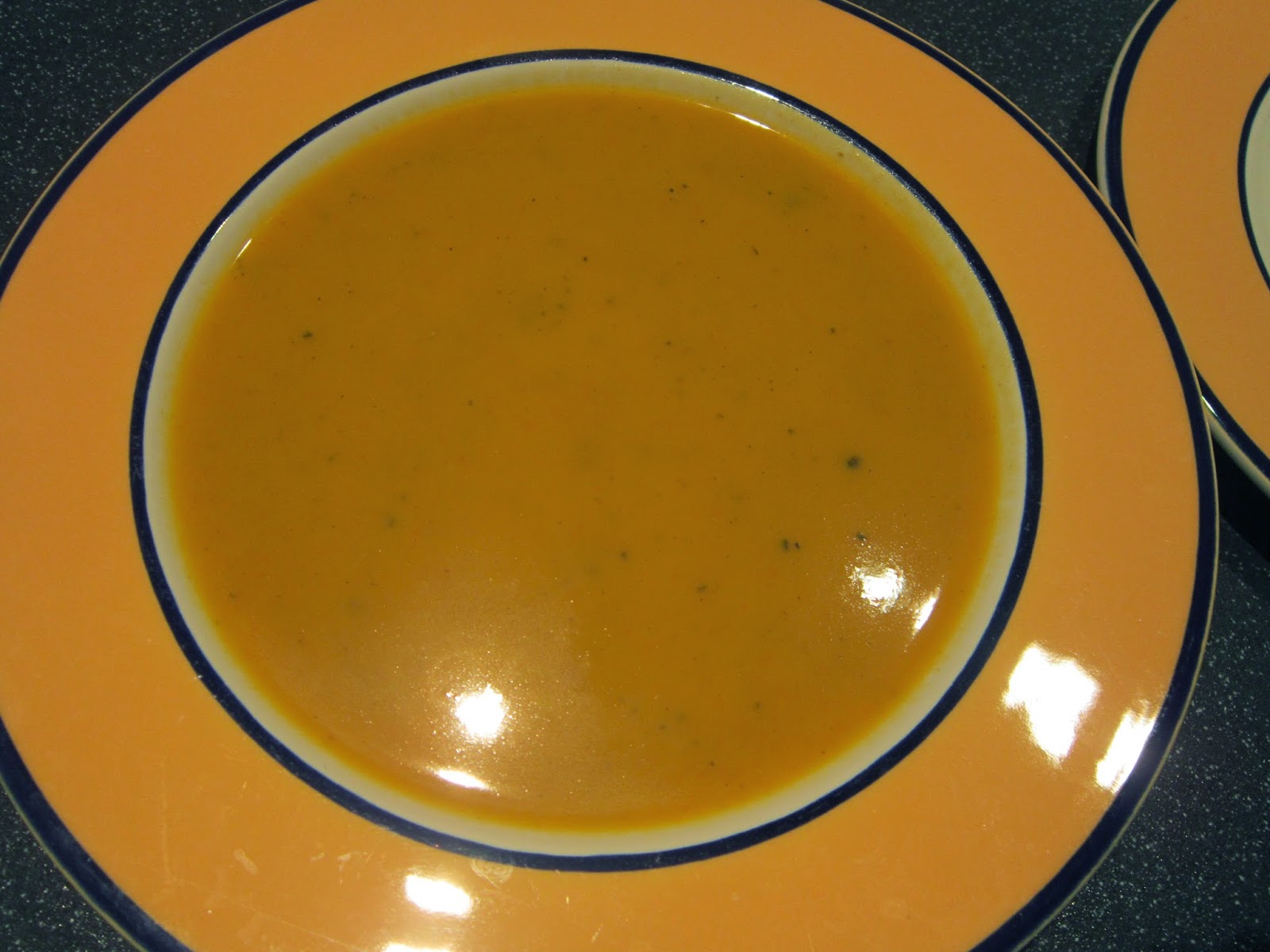 In 2012, they had made a ghoulash (see the pun?), which was delicious, but I think last year was their best so far. I think it is because of the Stilton. There is just something about cheese in a soup. I love all pumpkin soups, all variations of it, although I am not sure the taste of pumpkin is very distinctive, as it is not very strong. But it gives the soup a nice colour, if nothing else. And it is nice to use pumpkin as something else than Jack O'Lantern. This year, it is going to be the ghoulash again, and you can find its recipe on their website of you want to try it. Sadly I could not eat the pumpkin soup on Halloween night: I was sick with a nasty cold so I had chicken noodle soup instead. But this year, it is going to be pumpkin soup and garlic bread.
Posted by Guillaume at 20:13

I am about to embark on an experiment making vegan pumpkin icecream, to accomodate the diet that village witch has recommended me.

There are lots of good dishes for the fall, one of my favorites is Greek stew: beef and vegetables stewed in red wine with cloves. So delicious.

Of course I still prepare our family's traditional Halloween meal: macaroni and cheese with polish sausage. It's a little rich for me these days, but once a year can't hurt.

I've been thinking that I need to invent a new autumn dish, using pumpkin and turnip, the traditional jack o' lantern vegetables. Perhaps a stew served with cheese?

Garlic bread makes everything good! Cheese just puts it over the edge! I send along wishes for good health so you will be able to enjoy Halloween to its fullest!

I've never seen soup in a carton like that before...but I LOVE soup. That Pumpkin with Stilton and Sage sounds SO yummy. I love cheese too...almost all kinds of cheese, except for anything hot, spicy, or peppery. I'd love to eat a nice hot bowl of that Stilton/Pumpkin soup with a fresh hot baguette of bread and some butter! Yum...perfect Autumn dinner! :o)

I love cream soups with cheese blended in. And garlic bread enhances everything! As for pumpkin, I'm never quite sure if it's the actual pumpkin flavour I enjoy or the spices that usually accompany it in dishes. Either way, this soup sounds delicious!

I never thought a post about soup could be so popular. Had the ghoulash tonight. Nice and hearty, but not as good.