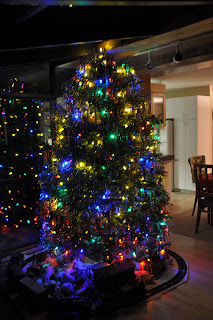 You can see at your left the Christmas tree of my family in Chicoutimi. Believe me: it is much more impressive in real, and you have the lovely smell which I miss terribly. because we are still during the Christmas holidays, because we are on Boxing Day, which I hate and I want to exorcise it as much as I can (even though it is practically over now), I thought I would upload two Christmas carols tonight, not just one, as I could not decide between the two. The first one, Good King Wenceslas, I already uploaded last year. It is also St-Stephen's Day, the Feast of Stephen as the song says, so I had to reuse it. The second is Christmas in Killarney, which I discovered a long time ago as sang by Bing Crosby. But is is not nearly as good as done the Irish way. So I decided to put both carols interpreted by the Irish Rovers, who are ironically enough Canadian. I love this song as it is a nostalgic one and it appeals to the expat I am, even though I am not Irish. And I have this love for Irish culture, so I thought I would celebrate it on another day than St-Patrick's Day. The picture of a Christmas tree is a bonus.

Your family's Christmas Tree is so lovely and I like the way it reflects in the glass window. Happy St.-Stephen's Day to you as well!

When I was a little girl I thought Boxing Day was actually about the sport, and asked my Dad why people would want to fight each other. I much prefer its Irish name. I don't blame you wanting to avoid the day, and more especially the shops. I was once in London during the post Christmas sales when a girlfriend dragged me from shop to shop. I have never being more terrified or exhausted in my life:-)