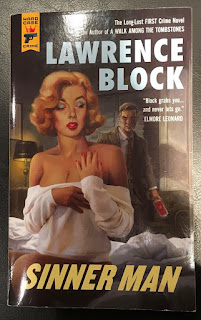 Tonight’s reading recommendation and my first reading suggestion of the year: Sinner Man by Lawrence Block. Which I bought because it’s of Lawrence Block and a long lost classic and most definitely NOT because of its cover. Which is still gorgeous and pulpy, mixing Eros, Thanatos and hard liquor. In it, insurance salesman and utter loser Don Barshter accidentally kills his wife. To escape justice, he takes up a new identity and a new persona: up and coming mobster Nathaniel Crowley. He soon thrives as Crowley and is far better, richer and happier as a gangster as he ever was as a salesman and husband. But a smart femme fatale he took a self destructive interest in could destroy everything. It’s a clever and gripping Noir variation on the Jekyll and Hyde theme and as much a thriller as it is a tragedy. There is a fascinating afterword from Block as well, explaining the genesis of the story, its disappearance and its borderline miraculous rediscovery decades later. A must read.
Posted by Guillaume at 22:26

Oooooo, "Eros, Thanatos and hard liquor" -- the Holy Trinity of Noir! It DOES sound like a good book -- do you know if it ever got made into a movie?

I checked his website -- doesn't seem like this one was ever filmed. But according to his Wikipedia page, holy moly, was this guy a prolific author! Just pumped them out under a variety of pen names! A true pulp writer! He's 80 now and still alive.

The novel was never made into a movie, in fact it was long forgotten, until being rediscovered recently.