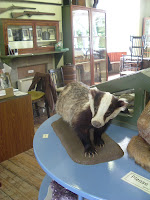 Hey, I just discovered it this evening: Springwatch was on! I catched it just in time. I cannot believe I didn't know, although it is a bit late in the year to have a "Spring" watch. It is true that I am not as big a fan of Springwatch as I am of Autumnwatch, but it is still lovely to see British wildlife. There are the usual stars of the show: beavers (they have been reintroduced in Britain), foxes (among my favourite), barn owls (another favourite of mine), various small rodents, birds and badgers. For me, a badger is mainly the name of a character in this British classic and this weird song. I saw a dead one by the road last Sunday, going back home. I felt a bit sad. Badgers, like all animals, are fascinating creatures. I will learn more about them with the program.I don't think I can love them as much as foxes or owls, but they will be my wildlife discovery of the year.

This picture was taken in the Keswick Museum. Any excuse is good enough to put pictures from Keswick here, but there is another reason for putting it here: as badgers are elusive, it was easier to take a picture of a dead stuffed one than a live one.
Posted by Guillaume at 21:14

Oh you are the lucky one.. I just tried to watch some online but it is not available in Canada.. Darn!! Looks like a great series.