The Temple of Aeolus 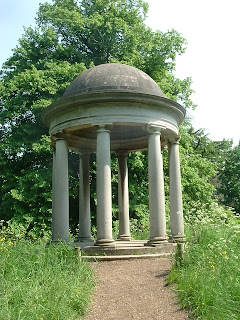 This is a picture of the Temple of Aeolus in Kew Garden. I mentioned before that I would blog about it again, as it fascinated me. I don't know exactly why this more than another attraction of the park, which had plenty to choose from. Hey, it's not even a real Greek temple! But I am like many Westerners, absolutely fascinated by Greco-Roman culture, about their mythologies and the stories they invented. It is funny: when one visits a park here (or in France), you can find plenty of neoclassical statues or, in this case, pseudo-Greek stuff. But I cannot complain. I can understand why people wanted to inherit this culture.

I have been into Greek mythology since I watched as a child Ulysse 31 and Clash of the Titans. Then of course I read about the real thing and discovered The Odyssey. I got fascinated by it. Ulysse was by my favourite Greek hero. He was a wanderer, a cunning man, therefore easier to identify with (his strenght came first and foremost from his intellect), his story was very dramatic but had a happy ending (and a bloody climax). Ah yes, and there was this episode with Aeolus. A short episode, not nearly as violent and dramatic as most of the others, yet not devoid of bitter irony.

But I love the temple for other reasons than its association with my favourite Greek story. I love its simplicity, the way its pillars almost sprouts out of the greenery, as if it had been there all along, belonged to the place like the trees and grass and plants. And well, it is appropriate temple to the god (or, originally, the ruler) of the wind that the temple is circular, entirely open on top of a hill to the winds that can blow through it, visited by Aeolus himself, in a way. I don't know if Sir William Chambers who designed it ever thought about it. I thought about our old Dungeons and Dragons games and regretted that we did not think about something like that: a small abandoned temple in the wilderness. it is such a beautiful, atmospheric setting.
Posted by Guillaume at 23:26

It certainly invites you in, draws one to it, even in a photograph. I can imagine sitting under it dreaming for many hours. It is a refuge from the hurly burly of the outside world, and maybe that's exactly what its designer intended. Either way this is a beautiful post. We sometimes don't pay enough attention to the the quiet, simple things in life.

@PJ-Mais à Donjons, on peut toujours voir et visiter ces petits endroits simples, sans nécessairement que ce soit au coeur de l'aventure. Et même un adversaire terrifiant peut attendre les personnages dans pareil endroit.
@Anonymous-Thank you! But I am not quite sure it was mant to be "simple", it was a commission by a famous architect, after all. I certainly find it more impressive in its simple appearance than many huge monuments.

But it is indeed a simple design, even if he was a famous architect. Maybe he realised that something ornate or ostentatious would be at odds with the natural surrounding. In its simplicity, and harmony with the environment lies its beauty.