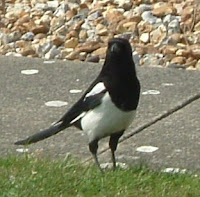 I took this picture during our visit at Kew Gardens. There were plenty of things to take picture of, impressive views, I missed a lot of them, but I was happy taking a picture of a magpie. Fascinating creatures which I have discovered when I started studying in England. before that, I knew them from their reputation of thieves, but the bird meant little to me. I knew Overture of La gazza ladra since I had listened to it in the soundtrack of A Clockwork Orange and the role the magpie (and Rossini's opera) played in this Tintin album. Now I have to confess I know little about the bird still, close to zilch about their bad reputation as thieves of shiny objects, but I just love their look, the mix of white, black and blue.

Since I saw it and managed to take a close shot of it, I got the Overture of The Thieving Magpie in the head. I had decided to put it here, since I haven't had enough music recently.

What a lovely photo Guillaume. They are such cheeky so and so's, but full of character:-)