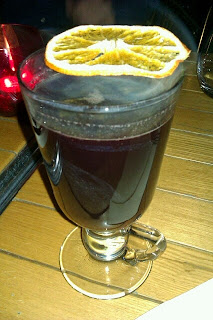 Tonight, there was a Christmas fayre in town, one of those outdoors markets that sell lots of charity things and plenty of food and drink, including mulled wine. An elderly man at one of the stands offered me a cup, I politely refused explaining: "I had plenty yesterday and woke up with a nasty headache." He replied, undeterred: "You may have had a worse wake up without it." This made me laugh, and I decided to make it our new great unknown line, the first of December and of Advent. A perfect one for this Christmas-related post and to its seasonal topic.

So yes, mulled wine. Yesterday, I drank this glass of mulled wine, in the company of Odin's owners. It was as an apéritif before one of the best restaurant dinners (suppers really as it was late) I had in ages, but I digress. I will blog about the food another time. Now, the wine. It was absolutely to die for, the best mulled wine I had in life. It was just warm enough, just spicy enough, with a nice tang to it, powerful in a soft way. Perfect for the cold winter night we had yesterday. I came to mulled as of late, one year in my twenties my parents and I made some to make Christmas a bit British, I think we used the recipe on Wikipedia. It had been good, but not like that one. I do drink it from time to time, but not very often as I am more of a beer drinker and I have had good ones, enjoyable ones, but it didn't strike me until last night on how good it can be. So I think it will become a Christmas tradition for me. My liver may suffer for it, but so what?
Posted by Guillaume at 22:01