The Twelve days of Christmas (a correspondence) 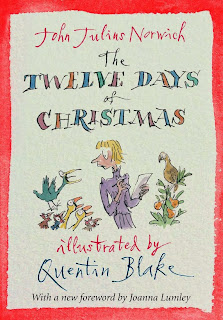 Today, I am plugging again this book, which is a satire of The Twelve Days of Christmas. I mentioned it on Vraie Fiction twice, here and here. It was written by John Julius Norwich and drawn by Quentin Blake. I had first seen it (and read it) in a Waterstone's back in 1999. I don't know why I didn't buy it then and there. I could find it online, but the illustrations of Blake enhances the reading experience and make it all the funnier. But nothing was lost in the end: even though I had not seen it again in a bookstore for years, it has recently been re-edited, with a foreword by Joanna Lumley. And I adore Joanna Lumley.

Anyway, what is the book about? It is about a presumably young man, Edward, sending his beloved fiancée Emily, who lives with her mother, each and every one of the items of the song, mainly, but not only, birds. Noisy birds. each and every day of the Christmas, for the whole twelve days of Christmas. Emily tells the story through letters sent to Edward, first completely smitten by his romantic idea and grateful for his original gift, then less than thrilled, finally outraged. There is a brilliant crescendo in her anger until the final bang, where the drummers drumming (the entire percussion section of the Royal Liverpool Philharmonic Orchestra) show up on the twelfth day. I don't know why Liverpool's orchestra, but since I lived there for a year, it also adds to the pleasure of the text to me. In the end, it is simply a deliciously funny book. Whether you love or hate the original song that inspired it. Oh, and the pictures! They show such a display of emotions. And you can almost smell the menagerie.
Posted by Guillaume at 20:21