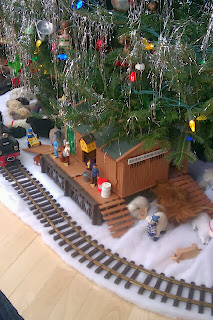 As my readership knows, I borderline obsess about trains. I have even blogged about them less than a week ago. I am no connoisseur, I mean I wouldn't know how the whole engine works, but I was never blasé about them. Since childhood, I love train as a mean of transport, maybe the first modern one, as a piece of technology and as an object. I find old trains aesthetic. And I love the atmosphere of train stations, some more than others obviously. I love the look of them too, old ones especially. My fascination with trains and everything related to them dates back to a childhood Christmas when my father bought us, and himself, a LGB electric train. I got hooked since then. My brothers and I played plenty of games set around the train, from pure fantasy ones where the train was going to the North Pole to "realistic" action thrillers.

My father bought a train station to go with the train years later. I think I was already a grownup, or at least a teenager, or young adult. Unfortunately, it was not a LGB one, but a Playmobil station. I am not sure they even sell stations at LGB. But it is still a good one and it does have the cachet of many old European stations. It is at the center of the village at the bottom of our Christmas tree, surrounded by many, many sheep we have gathered from all around the places we visited, houses (made of fluffy stuff), a Scottish ox, a few more animals and on the side there is a koala hanging on the pole of a Swedish flag (!). It is now the centerpiece of the base of our Christmas tree.
Posted by Guillaume at 22:16